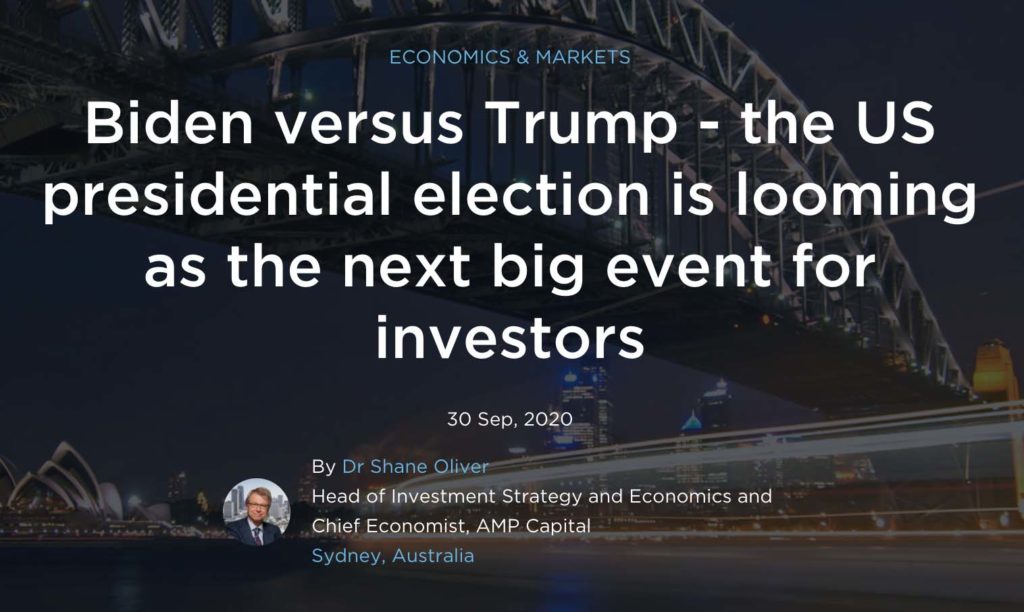 The US election is only a month away. Markets are now paying close attention to it for several reasons. First, Joe Biden is proposing higher taxes and more regulation. Second, the proximity of the election made worse by the move to replace Justice Ginsberg may have reduced prospects for needed fiscal stimulus. Third, increased use of postal voting could mean it will take longer before the outcome is known. Finally, President Trump‚Äôs scorn for postal voting (which polls show 45% of Biden voters plan to use versus 10% of Trump voters!) looks to be setting up a challenge to the result if he loses and his refusal to guarantee a peaceful transfer, adds to uncertainty.

The economy versus the virus

History indicates incumbent presidents tend to lose when there is a recession in the two years before the election.

However, Trump‚Äôs best hope is for a rebound in the economy, with data pointing to an 8% rebound in September quarter GDP (due just before the election) thereby ending the recession. There has been a precedent for incumbent presidents being re-elected if the recession ends prior to election day. But it‚Äôs only 50/50 and was early last century – with Presidents McKinley in 1900, Roosevelt in 1904 and Coolidge in 1924 getting re-elected as recessions ended prior to the election but not so for Presidents Taft in 1912, Ford in 1976 and Carter in 1980. Working against this for Trump would be if the recent resurgence in US new coronavirus gathers pace resulting in renewed uncertainty about the economic outlook.

Bottom line: Biden is ahead but its premature to write Trump off.

Taxation:¬ÝBiden plans to raise the corporate tax rate to 28% (from 21%), return the top marginal tax rate to 39.6% (from 37%) and tax capital gains and dividends as ordinary income.

Infrastructure:¬ÝBoth plan to spend $1trn or more over 10 years on infrastructure with Biden focussed on renewable energy.

Climate policy:¬ÝBiden aims for the US to reach net zero emissions by 2050 by raising the cost of fossil fuels & boosting the development of alternatives (possibly with a carbon tax)

Regulation:¬ÝBiden is likely to end the era of deregulation.

Coronavirus:¬ÝBiden is likely to oversee a more robust, organised and consistent response to dealing with the virus.

Trade and foreign policy:¬ÝA re-elected Trump is likely to ramp up his trade war with China with ‚Äúmade in America‚Äù tax credits and more tariffs on imports on China and possibly elsewhere including Europe. By contrast, Biden would likely rebuild the alliance with Europe, work with international organisations like the World Trade Organisation, work to re-establish the nuclear deal with Iran and adopt a more diplomatic approach to dealing with issues with China (working with Europe and Asian allies).

Budget deficit:¬ÝFor the near term, the budget deficit is likely to remain high whoever wins, but historically they have fallen under Democrats after rising under Republicans. That said, if the economy proves slow to recover, Joe Biden may be more likely to respond with large public sector spending programs.

Economic impact of a Biden victory

Higher tax rates and more regulation under Biden would be negative for the growth outlook on their own. However, as with all things economic, it‚Äôs never as simple as that.

So, I see no reason to expect a weaker economic/investment outlook under Biden beyond near-term uncertainty.

Since 1927, the election year has been reasonable for shares with an average total return of 11.2% pa. Of course, this year is complicated by coronavirus & this election comes with greater than normal uncertainty. There are several points to note.

First, the next month or so could see continued volatility and the correction in shares may have further to run:

Second, while delays in counting postal votes may mean it takes longer to get a result (which under one scenario could see counting first go in Trump‚Äôs favour and then in Biden‚Äôs as more postal votes are counted), Trump‚Äôs refusal to guarantee to go peacefully should be taken ‚Äúseriously but not literally‚Äù ‚Äì it‚Äôs hard to see him starting a civil war and senior Republicans have not supported him on this with Senate majority leader McConnell saying ‚Äúthere will be an orderly transition just as there has been every four years since 1792.‚Äù

Third, if ultimately Trump is the winner, US shares may initially celebrate and outperform global and Australian shares but would be vulnerable next year as the trade war with China ramps up again. By contrast, after an share initial negative reaction if Biden wins, for the reasons already noted, there is no reason to expect a weaker economy, and hence share market, under a Biden presidency.

The US election has the potential to create further volatility in investment markets. A Trump victory will mean more of the same and at least initially would probably be more positive for US shares than global and Australian shares (all other things being equal). By contrast a Biden victory may add to short-term volatility but this is likely to be short lived as there is no reason to expect a weaker economy and hence share market under a Biden presidency and he is likely to take a less disruptive approach to trade and foreign policy issues.

While every care has been taken in the preparation of this article, AMP Capital Investors Limited (ABN 59 001 777 591, AFSL 232497) and AMP Capital Funds Management Limited (ABN 15 159 557 721, AFSL 426455)¬Ý (AMP Capital) makes no representations or warranties as to the accuracy or completeness of any statement in it including, without limitation, any forecasts. Past performance is not a reliable indicator of future performance. This article has been prepared for the purpose of providing general information, without taking account of any particular investor‚Äôs objectives, financial situation or needs. An investor should, before making any investment decisions, consider the appropriateness of the information in this article, and seek professional advice, having regard to the investor‚Äôs objectives, financial situation and needs. This article is solely for the use of the party to whom it is provided and must not be provided to any other person or entity without the express written consent of AMP Capital.