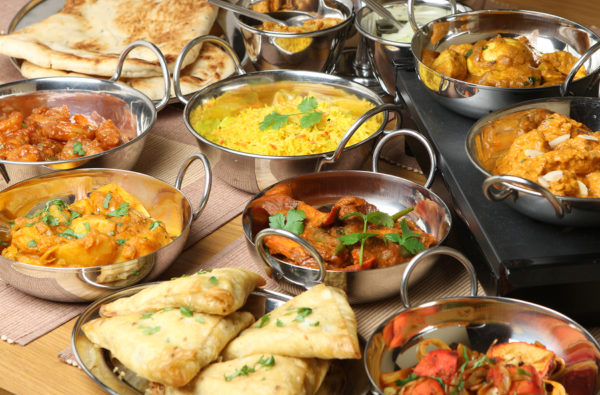 The one place I cannot resist when I’m in a new country is the local supermarket, and my recent trip to India was no different – although I did get some strange looks from puzzled locals.

That’s how I ended up with an idli steamer, idli being a savoury cake popular for breakfast throughout southern India.

I’m yet to use my idli steamer, and it could well be destined for the garage along with the other kitchen gadgets I’ve purchased in good faith, only to abandon months later (hello, breadmaker!).

But I still love to seek out the K-Mart or Big W equivalent in foreign lands for the thrill of the familiar next to the strange – tea-towels next to incense burners, or T-shirts cheek-by-jowl with wreaths of artificial flowers for Ganesh, Shiva or other house deities.

I once even forced my then-boyfriend to lug home a toilet roll holder from a shop in Italy, because it was so beautifully designed.

On the first morning of my trip to India, I’m delighted to be served idlis, when the luxurious Leela Palace Hotel in Begaluru lays on a typical south Indian breakfast for our group.

The soft bun-like bites are made from ground rice and ground chickpeas or lentils, fermented and flavoured with fenugreek seeds, and are used for mopping up the juices in the generally-vegetarian dishes that accompany them.

It’s the grinding and fermenting of the ingredients that’s so far held me up in the production of my own idlis, given that you’re supposed to grind the ingredients cold (a mechanical grinder will heat up and start to cook the rice and pulses).

The batter is generally prepared the night before, and is then cooked in the steamer, in little cups that remind me of an egg poacher my mother had when I was a child.

Once considered the staple of the southern states, idlis are now on offer throughout the subcontinent and are so prevalent that the purchase of the steamer (at a really reasonable 900 rupees, or about $A20) seemed to be the ideal not-a-souvenir to take home to Australia.

While they can be made at home, the majority of urban Indian households these days would eat them at a restaurant, and in Bengaluru our group visits one of the best places to sample them – the Mavalli Tiffin Rooms or MTR.

Jam-packed with locals who sit on benches in ante-rooms waiting to be called to their tables, the restaurant fails to offer a menu, rather bringing a range of its best-loved dishes to our table, including dosas (crispy pancakes), vadas (savoury doughnuts) and halwa (sweet rice studded with nuts).

The star of the show is the local coffee, made with evaporated milk and frothed by being poured from glass to glass by the dexterous waiter.

It’s piping hot and fragrant, rounding out the flavours from the brunch menu, which in south India is typically based on chilli, ginger, garlic, onion and tamarind, with a range of other spices including turmeric, coriander and cumin.

After shoving in as much as we can fit, we’re invited down a precariously-steep staircase for a look into the kitchens, where a host of barefoot men are performing feats of culinary artistry with scant regard for occupational health and safety.

Our guide from Unventured Tours explains to us that the restaurant was opened in 1924, when one of three brothers who’d left their small village on the coast to seek work as cooks in Bengaluru decided to corner the market in coffee and idlis for local workers.

MTR is now into its third generation and has restaurants as far afield as Singapore and Dubai, catering for the Indian diaspora, which begs the question: when are we likely to see a branch in Australia?

After we’re whisked round some of Bengaluru’s magnificent sights, including the historic Bengaluru Fort with its huge doorways to allow elephants to pass in and out, the Leela brings us back to the topic of Indian cuisine. We enjoy a short cooking course, where one of the hotel’s many excellent chefs shows us the different bases, known as sambals or chutneys, that are used to begin Indian dishes.

Fresh and dried ingredients are chopped, fried and stirred in various combinations at three cooking stations set up on the table in front of us, before meats or vegetables are added to the slowly-bubbling mixtures.

Some bases begin with coconut oil, others with ghee. Some are given a kick with crumbled, dried whole chillies, others with chilli powder and fresh green chillies. Still more are given flavour and texture with fresh tomato and chopped green beans, bought from the markets that morning. Some use plain water; others dal (cooked lentils), coconut milk or stock.

All of them offer a unique flavour platform that allows the added meats or vegetables to shine. Whether you’re a vegetarian or not, a trip to India will surely leave you with a better appreciation for the wonderful spices that go into the country’s complex dishes.

But maybe leave the idli steamer on the shelf.

Method: Mix all the ingredients together and make a fine powder. Store in an airtight container.

GETTING THERE: Jet Airways flies daily to Bengaluru from Singapore, and Qantas flies direct daily to Singapore from Sydney, Melbourne, Brisbane and Perth.

STAYING THERE: : The Leela Palace Bangalore is a five-star independent hotel represented by Preferred Hotels and Resorts. It offers every luxury the traveller could imagine, with rooms from around $A325 per night. Ask the concierge about cooking classes, tours or anything your heart desires.

PLAYING THERE: Tours of Bengaluru with Unventured cost INR 2500 ($A55) and can be booked through their website at http://unventured.com/package/bengaluru-markets-pete-walk/ or similar tours can be arranged online from around $A60.

MTR (Mavalli Tiffin Rooms) can be found across Bengaluru but the oldest location is at 14 Lalbagh Road.

* The writer travelled as a guest of Preferred Hotels & Resorts, The Leela Palace in Bangalore, and Jet Airways in association with Qantas.