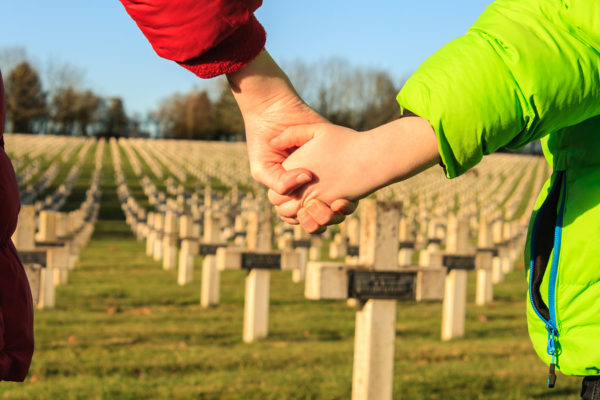 More than 100 years since that fateful landing at Gallipoli, Australians are being reminded of the importance of sharing the Anzac story with younger generations.

Tens of thousands rose early on Wednesday to attend dawn services – big and small – across the country, including many children.

This year marks the 103rd anniversary of the Australian and New Zealand Army Corps landing at Gallipoli and the centenary of the Battle of Villers-Bretonneux.

“Anzac day is not about glorifying war, but about celebrating the Australian spirit,” Air Vice-Marshal Steven Roberton told the large crowd at Sydney’s Martin Place.

“Anzac signifies strength and quality of character, attitude and action that transcends time.”

The challenge, he said, was to make sure the spirit of Anzac was passed on to Australia’s children and to honour the fallen and their sacrifice.

Suzanne and Paul Smith, who for decades took their now-adult son Matthew to dawn services this year brought their five-year-old grandson Xavier for the first time.

Ms Smith, whose own father was a serviceman, agreed that it was important that future generations appreciate the sacrifices of those who came before them.

“They’re growing up in a different world now, so it makes a big difference,” she told AAP.

Patrick Joseph Delacour went to France with the 41st battalion in WWI, aged 25, but never returned.

“We wanted to show respect to the soldiers, the men and women, the nurses that served in WWI and WWII to keep us safe,” the boys’ mother Tracey told AAP.

A beachside service was also held at Currumbin on the Gold Coast.

An estimated 38,000 people braved the cold in Canberra, as Colonel Susan Neuhaus reflected on a century of severed limbs and broken bodies.

The veteran surgeon, who returned from active service in Afghanistan, said she – like many Australians – had no faded photographs of men or women in uniform at home or relatives who served on the beaches of Gallipoli, muddy fields of Somme or the jungles of South East Asia.

“And yet like all of us I benefit from what they have done,” she said as dawn broke over the Australian War Memorial.

Women were restricted to nursing roles prior to the WWII, when all three services introduced women’s branches, he said.

“Women were fully integrated during the 1970s and 80s, and since then have continued to make their mark with a full range of responsibilities across all three services,” he told the crowd.

Prime Minister Malcolm Turnbull is in France to attend the Anzac Day dawn service at the Australian War Memorial just outside Villiers-Bretonneux.

Both he and French Prime Minister Edouard Phillipe will give commemorative addresses, while Prince Charles will deliver a reading.