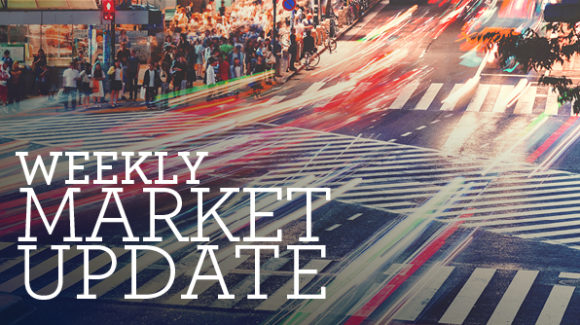 Share markets were mixed over the last week with US shares gaining 2.2% to a record high helped by good earnings news, Chinese shares up 2.2% and Australian shares up 0.7%, but European shares down 0.2% and Japanese shares down 0.7% on a further rise in the euro and Yen. Bond yields were flat in the US and Japan but up in Europe. However, the big development was a further plunge and gyrations in the US dollar. The fall was accelerated by comments by US Treasury Secretary Mnuchin which intimated that the US Government had abandoned its “strong dollar” policy, but then partly reversed after President Trump indicated he ultimately wants to see a “strong dollar”. Regardless of all the political talk around it, the US dollar fell around 1.7% over the past week and contributed to gains in commodity prices, with oil also boosted by falling US oil stockpiles, and a rise in the Australian dollar back above US$0.81.

Lower US dollar creating consternation, but it may be at or close to a reversal. The plunge in the dollar (down 14% since the start of 2017) is basically a monetary easing for the US and will further boost US growth, profits and shares. However, it’s working against Fed tightening, increasing the likelihood that it will get more hawkish and US tariff hikes risk driving a stronger, not weaker, US dollar. For Europe, Japan and Australia the lower US dollar is a defacto monetary tightening which could further delay eventual rate hikes, with both the European Central Bank (ECB) and Bank of Japan over the last week indicating no early exit to their monetary stimulus. With the Fed at risk of getting more hawkish, other central banks remaining relatively dovish and Trump actually advocating a strong dollar, we may be close to seeing an upturn in the US dollar or at the very least further downside in the dollar is likely to be limited.

Global growth forecasts still being revised up. In its latest global economic review, the IMF revised up its growth forecasts yet again, with broad-based increases. The pattern of IMF revisions is basically the same as for private sector forecasters and as the next chart highlights years of growth downgrades have given way to upgrades as the post-GFC hangover has given finally given way to more self-sustaining growth. Just as the growth downgrades were associated with falling inflation, ongoing monetary easing and falling bond yields the upgrades are likely to eventually give way to rising inflation, gradual monetary tightening and further increases in bond yields.

The US shutdown ended after three days, with Congress extending funding out to 8th February. Agreeing a solution for “Dreamers” (children of illegal immigrants) remains a big political issue and so another brief shutdown is possible after 8th February. However, the economic impact is likely to remain trivial – the Democrats are wary of the political risk of being seen to blame for a shutdown and so any further shutdown is likely to be brief. From the perspective of economists, provided the flow of US economic statistics is not disrupted it’s definitely trivial! The US Government’s debt ceiling will also start to become an issue next month (with the ceiling likely to be reached in March or early April) – but expect another last minute solution as neither side of politics wants to risk default.

Meanwhile, President Trump’s decision to impose tariffs on imported solar panels and washing machines confirms he is turning to trade to boost his popularity in an election year. Expect more moves this year as Trump tries to push his America First agenda which could cause moments of angst in investment markets. An all-out trade war with China is a risk worth watching, but is unlikely though – as Trump won’t want big increases in consumer prices hitting his base and China will likely react calmly. In fact, comments by Liu He, a senior adviser to President Xi, foreshadowing policies to further open its economy, boost imports and cut tariffs suggest China is going in the opposite direction. And news that the Trans Pacific Partnership is now going ahead without the US is good news in highlighting that the US is isolated in adopting protectionism.

US economic data remains mostly solid. Home sales fell, but readings for January business conditions PMIs, durable goods orders, leading indicators and home prices were all solid. December quarter GDP growth was lower than expected at 2.6%, but this was due to detractions from trade and inventories with strong gains in consumption and investment. The December quarter US earnings reporting season is off to a strong start. Of the 133 S&P 500 companies to have reported so far, 81% have beaten earnings expectations and 82% have beaten on sales.

The ECB and President Draghi remained dovish at their January meeting, but it wasn’t enough to pull the euro back down. The key messages were that: quantitative easing will continue out to September, after which it could be extended or tapered; there will be no rate hike until “well past” QE ends (which probably means not until around mid-2019); and the rising euro is a source of uncertainty. However the ECB’s dovishness was qualified by talk of data dependence and so wasn’t quite strong enough to pull the euro back down. Meanwhile, Eurozone business conditions PMIs, the German IFO business climate survey and consumer confidence rose even further in January to very strong levels, which is consistent with a further rise in economic growth. The ECB’s December bank lending survey also showed stable or easing lending standards and rising credit demand.

The Bank of Japan made no changes to its monetary policy or its growth and inflation forecasts. While it noted that inflation expectations are no longer falling, it continues to see downside risks to inflation, and the one dissent was dovish. With core inflation stuck at 0.3% in December and way below target, no early exit from monetary stimulus is likely.

NZ inflation surprised on the downside, highlighting the move to higher inflation globally is still taking a while to get underway.

It was a light week for data releases in Australia, with skilled vacancies showing continuing growth albeit with some slowing.

In the US, the Fed (Wednesday) is not expected to make any changes to monetary policy, while its commentary is likely to be upbeat and consistent with further monetary tightening this year, including ongoing quantitative tightening and another rate hike in March. We remain of the view that stronger US growth and rising inflation will drive four Fed rate hikes this year, whereas the US futures market is only pricing in two and a bit. It will also be a busy weak on the data front in the US, with payrolls (Friday) likely to show strong January jobs growth of 180,000, unemployment remaining low at 4.1% and wages growth rising slightly to 2.6% year-on-year. Also expect strong December personal spending data and a slight rise in core personal consumption inflation (Monday) to 1.6% year-on-year, continued strength in home prices and consumer confidence (Tuesday) and the January manufacturing conditions ISM (Thursday) to remain strong at around 59. December quarter earnings results will also continue to flow.

Eurozone December quarter GDP growth (Tuesday) is expected to confirm a further pick-up in economic growth to around 0.8% quarter-on-quarter or 2.8% year-on-year. December unemployment is likely to fall to 8.6% (from 8.7%) but core inflation for January is likely to remain unchanged at 0.9% year-on-year (both are also due Tuesday).

Japanese data for jobs and household spending (Tuesday) and industrial production (Wednesday) are expected to be strong.

Chinese business conditions PMIs (due Wednesday and Thursday) are expected to remain consistent with solid growth.

In Australia, December quarter inflation data is likely to be consistent with the RBA remaining on hold for now. Higher prices for petrol and tobacco are expected to push headline CPI inflation up to 0.7% quarter-on-quarter (or 2% year-on-year), but underlying inflation is expected to remain subdued and below target at around 0.5% quarter-on-quarter or 1.9% year-on-year. In other data, expect the NAB business survey (Tuesday) to show continued solid business conditions, credit growth (Wednesday) to remain moderate, business conditions PMIs (Thursday) to remain solid, CoreLogic data for January (also Thursday) to show a further cooling in the Sydney and Melbourne property markets and building approvals for December (also Thursday) to show a 10% decline after a strong rise in November.

The Australian December half 2017 earnings reporting season will start to get underway but with only a trickle of companies including Navitas, GUD and James Hardie. Expect to see a fall back to single digit earnings growth (after the resource-driven surge seen in 2016-17) with overall earnings growth around 5%, with resources slowing to around 1%, banks around 3% and industrials up 8% with strong results for healthcare, gaming, building materials and consumer staples.

For 2018, ongoing strong economic and profit growth and still easy monetary policy should keep investment returns favourable but stirring US inflation, the drip feed of Fed hikes and a possible increase in political risk are likely to constrain returns and boost volatility after the relative calm of 2017
Apart from the likelihood of a correction early in 2018 and more volatility through the year, global shares are likely to trend higher through 2018 and we favour Europe (which remains very cheap) and Japan over the US.

Australian shares are likely to do okay but with returns constrained to around 8% with moderate earnings growth. Expect the S&P/ASX 200 to reach 6,300 by end 2018.

Commodity prices are likely to push higher in response to strong global growth.

Low yields and capital losses from a gradual rise in bond yields are likely to see low returns from bonds.

Unlisted commercial property and infrastructure are still likely to benefit from the search for yield by investors, but it is waning and listed variants are vulnerable to rising bond yields.

National capital city residential property price gains are expected to slow to around zero, as the air comes out of the Sydney and Melbourne property boom and prices fall by around 5%, but Perth and Darwin bottom out, Adelaide and Brisbane see moderate gains and Hobart booms.

Cash and bank deposits are likely to continue to provide poor returns, with term deposit rates running around 2.2%.

After reaching as high as US$0.8134 which is near the top of the technical channel it’s been in since 2015, the next big move for the A$ against the US$ is more likely to be down than up, as the gap between the Fed Funds rate and the RBA’s cash rate goes negative. Trump’s comment that he wants to see a strong US dollar should help. Solid commodity prices will provide a floor for the A$ though.

Important note: While every care has been taken in the preparation of this document, AMP Capital Investors Limited (ABN 59 001 777 591, AFSL 232497) and AMP Capital Funds Management Limited (ABN 15 159 557 721, AFSL 426455) make no representations or warranties as to the accuracy or completeness of any statement in it including, without limitation, any forecasts. Past performance is not a reliable indicator of future performance. This document has been prepared for the purpose of providing general information, without taking account of any particular investor’s objectives, financial situation or needs. An investor should, before making any investment decisions, consider the appropriateness of the information in this document, and seek professional advice, having regard to the investor’s objectives, financial situation and needs. This document is solely for the use of the party to whom it is provided.