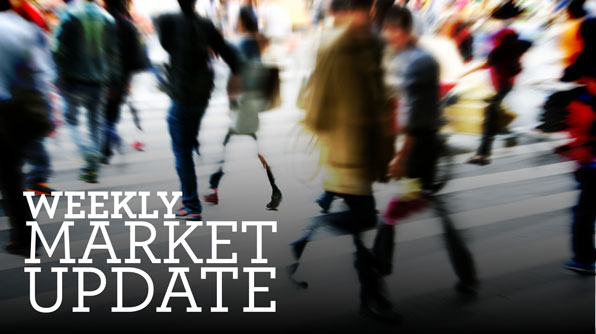 The past week saw shares fall a bit, further correcting some of the large gains seen since November amidst nervousness ahead of Donald Trump’s takeover as US President. US shares dipped just 0.1%, Eurozone shares fell 0.6%, Japanese shares lost 0.8% and Australian shares fell 1.2%. Chinese shares managed to rise 1.1%, helped by good economic data. Bond yields backed up a little, commodity prices were mixed and the US$ fell slightly, which saw the A$ rise slightly.

After large gains since the US election, shares, the US$ and bond yields entered 2017 vulnerable to a correction or a consolidation, with uncertainty about US policy under Donald Trump likely to provide a key trigger. This appears to be underway and may have further to run.

Donald Trump’s inauguration speech focussed on his broad campaign themes around “making America great again” and “America first”, highlighting that his administration will focus on increasing growth and jobs in the US. As expected there was little in the way of policy detail but President Trump did highlight infrastructure spending.

Markets are now waiting for more evidence that Donald Trump will deliver on fiscal stimulus and deregulation but uncertainty remains high about what he will do on trade. The risk of a tit for tat trade war between the US and China is high, particularly if Trump formally brands China a currency manipulator (possibly in the week ahead). I remain of the view that when it comes to actual policy moves as opposed to bluster we will see more of Trump the pragmatist rather than Trump the populist. To be sure he will adopt a tough line on trade given that it was a key election platform and this will initially cause bouts of market angst. But he also has a focus on jobs and won’t want to threaten this, which ultimately suggests pragmatic outcomes. One thing however is clear: with Trump as President we will have to get used to more bluster and noise (including tweets) than has been the case from previous US presidents.

Trumps comments on the US$ and Europe are worth a mention. It’s understandable that he regards the US$ as “too strong” given its huge gains. But unless the US economy slows relative to other countries and the US Federal Reserve (Fed) goes on another extended pause the risk is that the trend in the US$ remains up.

On one level, Trump’s negative comments about the European Union are a bit amusing, because after all it is just a less politically advanced version of the United States, with the integration of both driven by similar motivations (in fact their names suggest the same: United (States of) America, United Europe). Maybe the Europeans will start encouraging California towards a Calexit! In fact, America’s relative decline geopolitically, which may accelerate under Trump, is a powerful reason for Europe to stay together!

UK Prime Minister Theresa May’s outline of Britain’s Brexit terms suggest an element of the UK wanting to “eat its cake and have it too”. Basically Britain wants free trade with the European Union (EU) but at the same time control of its borders, laws and no more huge contributions to the EU budget. In other words, all of the benefits of being in the EU but none of the obligations. It’s doubtful all or any of the other 27 EU members will agree to all of this, so a “hard” Brexit continues to look likely. That said, there is a long way to go (two years of negotiations after Britain formally notifies it wants to leave) and allowing Parliament a vote on the final deal could still mean a softer final outcome, so Brexit is going to be background noise for investors for years to come. The key issue for global investors to remember though is that the UK is only 2.5% of global GDP and what really matters is whether Brexit encourages other countries to leave the Eurozone. So far there is not much evidence of that, with post Brexit elections in Spain and Austria seeing increased support for pro-Europe parties and Italy’s referendum telling us nothing on the issue. A hard Brexit would probably make it even less likely that Eurozone countries will seek to leave.

Putting aside political bluster and uncertainty over Trump’s policies, the world has entered 2017 on a strong note fundamentally with strong readings on economic momentum – rising/solid business conditions PMIs, the OECD’s leading economic indicators continuing to hook up, economic data surprising on the upside – And this is global not just in the US – so it’s more than just a Trump effect. Consistent with this, the International Monetary Fund (IMF) held its global growth forecasts unchanged (at 3.4% for 2017 and 3.6% for 2018) rather than downgrading them, which has been the norm for years. Added to this, there is ongoing evidence that the threat of deflation is receding with rising headline inflation readings in most regions. This is positive for nominal economic growth, corporate sales and hence profits. As a result, notwithstanding the likelihood of a further short term pull back in shares we remain positive on the outlook for them for this year.

US economic data remains solid. Business conditions in the New York and Philadelphia regions remain strong, housing starts are up strongly, home builder conditions remain strong, industrial production rose more than expected and jobless claims remain ultra low. Meanwhile, headline inflation continued to rise to 2.1%yoy in December on the back of the rebound in oil prices, but core CPI inflation remains stuck in the same range (just above 2%yoy) it’s been in for the last year. Consistent with all this, Fed Chair Yellen indicated that employment and inflation are near the Fed’s goals and that rate hikes can remain gradual, noting that the Fed expects to raise rates a few times a year until by the end of 2019 rates are back at the neutral rate of 3%. There is nothing really new here on what was foreshadowed by the Fed in December. Our base case is for three hikes this year, but fiscal stimulus could mean more.

Its early days in the US December quarter profit reporting season, but so far so good, with 75% of companies beating expectations.

There were no surprises from the European Central Bank (ECB) at its January meeting, which is basically on autopilot having committed in December to maintaining quantitative easing out to the end of 2017. ECB President Draghi’s comments were dovish, indicating there were no signs yet of a convincing uptrend in underlying inflation. If growth continues to hold up, an ECB decision to start tapering its asset purchases in 2018 is likely, but not until around September or even later this year.

Chinese GDP growth came in at 6.8% in the December quarter and 6.7% for 2016, pretty much as expected. Growth has clearly stabilised after the slowdown experienced in recent years. December growth in industrial production and investment slowed slightly but retail sales picked up slightly. Solid growth momentum allows Chinese policy makers to focus a bit more on slowing growth in debt and property prices. For 2017 we expect Chinese GDP growth of around 6.5%.

Australian data was a mixed bag over the last week, with consumer confidence remaining soft, housing starts falling again in the September quarter but housing finance and employment coming in stronger than expected. The December jobs data was particularly noteworthy, as it was the third month in a row of solid jobs growth. Over the December quarter, monthly jobs growth averaged a strong 22,000 a month, a big improvement from average job losses of 5,000 a month in the September quarter, and most of it has been in full time jobs, all of which suggests that the jobs market has perked up a bit. While unemployment rose in December to 5.8%, this was only due to higher participation.

In the US, the focus will likely be on Donald Trump’s initial actions as President. On the data front, the first estimate of December quarter GDP growth (Friday) is likely to be around 2.1% annualised, down from the 3.5% pace seen in the September quarter but still okay. In other data, expect the January manufacturing conditions PMI (Tuesday) to remain solid, solid readings for existing and new home sales (Tuesday and Thursday respectively), a rise in home prices (Wednesday) and a continuing improving trend in underlying durable goods orders (Friday). US December quarter earnings reports will continue to flow and are expected to show profits up by around 4.3% year on year.

Japan’s manufacturing conditions PMI (Tuesday) will be watched for a continuation of the recent improving trend and inflation data will be released Friday.

In Australia, the big focus will be on December quarter CPI data due Wednesday as a guide to what the RBA may do next on rates. We expect the CPI to rise 0.6%qoq, as higher prices for petrol and a tobacco excise increase offset seasonal softness in prices for utilities, health and education. This will push the annual inflation rate up to 1.5% from 1.3%yoy in the September quarter and a low of 1.1%yoy in the June quarter. Underlying inflation is expected to remain low at 0.5%qoq or 1.5%yoy. While this is in line with the RBA’s own forecasts, it’s well below the 2-3% target and if as we expect the RBA to revise down its growth and inflation forecasts at its February meeting, it may contribute to another rate cut. This could come as early as February, but we suspect a cut around May is more likely, as the RBA may prefer to wait for more clarity on how the economy is going.

Shares remain vulnerable to a further correction/consolidation in the next month or so, as excessively positive short term sentiment is worked off, as we enter the seasonally weaker month of February and as nervousness around what President Trump will do in relation to tax cuts, deregulation and US-China relations lingers. However, we see share markets trending higher over the next 12 months helped by okay valuations, continuing easy global monetary conditions, fiscal stimulus in the US, some acceleration in global growth and the shift from falling to rising profits for both the US and Australia.

Still-low yields and capital losses from a gradual rise in bond yields are likely to see low returns from bonds. Australian bonds are preferred to global bonds reflecting higher yields and as the RBA remains well behind the US in moving into a tightening cycle.

Commercial property and infrastructure are likely to continue benefitting from the ongoing search by investors for yield, but this demand will wane as bond yields trend higher over the medium term.

National capital city residential property price gains are expected to slow to around 3-4% this year, as the heat comes out of the Sydney and Melbourne markets and rising apartment supply hits.

The A$ is in the midst of a short term bounce as the US$ corrects from overbought levels. However, the downtrend in the A$ from 2011 is likely to resume as the interest rate differential in favour of Australia narrows & it undertakes its usual undershoot of fair value. Expect a fall below $US0.70 but little change versus the Yen and Euro.