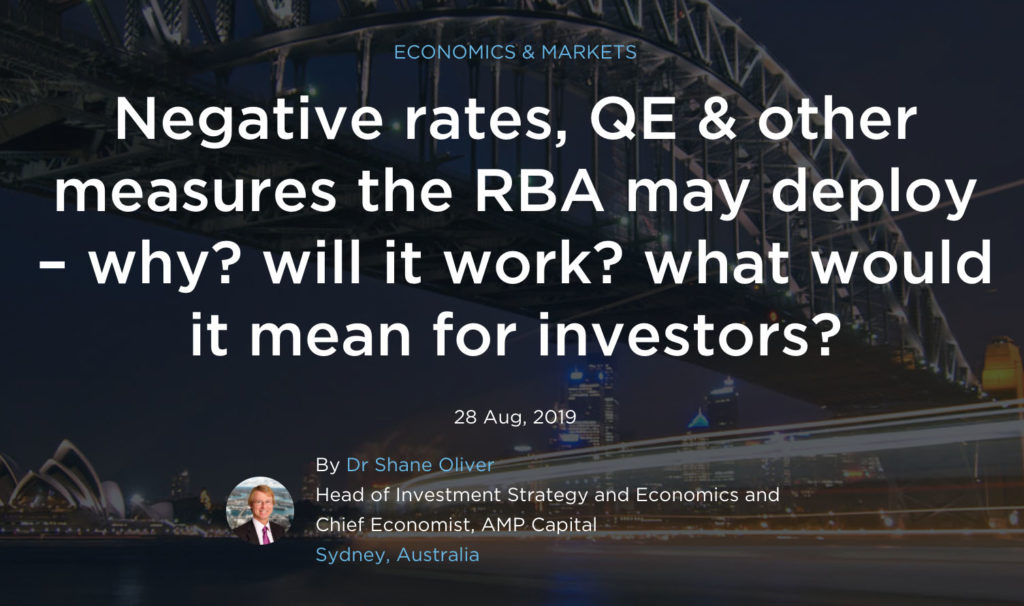 Since the RBA started cutting interest rates again back in June and in the process taking them closer to zero there has been increasing debate that it will deploy so-called ‚Äúunconventional monetary policy measures‚Äù such as negative interest rates and quantitative easing. This debate has hotted up in recent weeks after the escalation in the US-China trade war posing a rising threat to global growth, numerous central banks cutting interest rates this month in a so-called ‚Äúrace to zero‚Äù, the Governor of Reserve Bank of New Zealand saying that negative rates are possible and RBA Governor Lowe saying that its ‚Äúprepared to do unconventional things if the circumstances warranted it‚Äù even though he also said that QE was ‚Äúunlikely‚Äù. News of a Danish lender offering negative mortgage rates has only added interest to the issue. But what exactly are these unconventional monetary policy measures? Do they work? Would they work in Australia? Are there better options? Will they be deployed and when? What will it all mean for investors?

Put simply Australian economic growth has slowed sharply below its long-term potential reflecting the housing downturn and weak consumer spending. While house prices may be bouncing back in Sydney and Melbourne and there are anecdotes that the tax cuts are helping retailers, the downturn in housing construction has further to go and other factors from drought to the threat from the US trade wars cloud the outlook with increasing talk of recession globally. Slower growth has seen the outlook for unemployment deteriorate ‚Äì at a time when there is still a high level of unemployed and underemployed (at 13.6% of the workforce). Which in turn threatens to keep wages growth and inflation lower for longer. So, with the cash rate approaching zero the question naturally arises of what to do next? Of course, Australia is not alone – with talk of recession globally, other central banks ramping up or considering the use of unconventional monetary policies and all of this being reflected in record low bond yields. Basically, there is an excess of global savings and this is driving ultra-low interest rates.

They refer to a bunch of policies which have been deployed by major central banks in the aftermath of the GFC. They are:

But do they work?

A common comment is that ‚ÄúQE etc hasn‚Äôt worked in the major economies so why should it work here?‚Äù. In reality such policies do appear to have helped notably in the US and Europe where they were progressively deployed from the time of the GFC once interest rates hit zero and then became the lone stimulus measures as fiscal austerity took hold. Since its high in 2013 unemployment in the Eurozone has fallen from 12% to 7.5% and in the US it fell from 9% in 2011 to 4% in 2017 enabling the Fed to start unwinding unconventional monetary policy. Inflation has not been returned to 2% targets, but wages growth has lifted and at the start of last year it looked like the global economy was getting back to normal. So unconventional measures have helped. Of course, Trump‚Äôs trade wars have provided a big threat since then.

The main lessons look to have been that different measures are appropriate depending on the issues facing a country, that a range of measures are preferable to just one and that central banks need to go early unlike Japan which left it too late.

Will it work in Australia?

Our assessment is that unconventional monetary policy measures may help in Australia, but it will depend on the measure deployed and their impact will be limited particularly compared to overseas. We now look at the issues around each.

Explicit forward guidance¬Ý‚Äì the RBA has already started this with its comment this month that ‚Äúit is reasonable to expect that an extended period of low interest rates will be required‚Äù. If the US and ECB are any guide this is likely to morph into a specific time period through which rates will remain low. This can help keep bond yields low, but the low yields in other countries dragging our yields down will arguably do this anyway.

Zero or negative interest rates¬Ý‚Äì while the Fed stopped cutting rates in the GFC and its aftermath at 0-0.25% and the Bank of England stopped at 0.25%, the Bank of Japan and several European banks led by the ECB have taken rates negative. This negative rate applied to the deposit rate banks get for leaving deposits at the central bank and was motivated to encourage them to lend out cash which was building up as reserves due to quantitative easing. There is some evidence that negative rates in Europe have boosted bank lending but cut into bank profits because banks are reluctant to take interest rates on bank deposits (which are used to fund lending) below zero and so further falls in lending rates lead to reduced profit margins which may crimp lending. The thought of negative rates may also scare people. Sure a 10% bank deposit rate and 12% inflation is really no different to a -1% deposit rate and 1% inflation ‚Äì but the former would feel a lot better!

For these reasons it would make sense for the RBA to call a halt to cash rate cuts around 0.5% (which we expect to see by year end) or maybe 0.25%. There would be little point in going to zero or negative as the banks will be unlikely to pass it on in lower mortgage rates as they won‚Äôt want to take deposit rates negative. So negative interest rates will hopefully be avoided.

Asset purchases under quantitative easing¬Ý‚Äì QE in the US, Europe and Japan involved pumping printed money into the economy by central banks buying government bonds, high-rated private debt and, in Japan‚Äôs case, some shares. This was aimed at pushing long-term bond yields and hence borrowing costs even lower, boosting narrow money in the economy with the hope that it will be lent out, pushing investors into more risky assets to make more capital available for investing and (although they don‚Äôt admit it) pushing their currencies down. It tends to be what you do once interest rates have hit zero.

In Australia, QE may provide less help because there are less Government bonds for the RBA to buy given relatively low public debt in Australia, bond yields are already low anyway and in any case 85% of mortgage borrowing is linked to short-term interest rates and so there would be little benefit to the household sector from lower long-term bond yields.

What‚Äôs more it‚Äôs not clear that QE as practiced in other countries is the most efficient or fairest way to boost growth. There is no guarantee that the cash pumped into the economy is lent out and spent and a lot of it has just helped share markets (which is good for the better off) at a time when interest rates are low (which is not so good for lower income earners who rely more on bank deposits). More on this later.

Cheap funding for banks¬Ý‚Äì the RBA did this around the time of the GFC and the ECB and the Bank of England have provided cheap financing to banks tied to them boosting lending. It‚Äôs not really an issue at present in Australia as banks are not facing difficulties in terms of funding and the recent slowdown in credit growth in Australia owes more to tighter regulatory oversight around ‚Äúresponsible lending‚Äù. However, following the UK experience the provision of cheap funding to banks may be a way for the RBA to ensure that cash rate cuts are continued to be passed on to lower mortgage rates and that lending holds up as the cash rate gets closer to zero.

FX intervention¬Ý‚Äì this is a return to old fashioned RBA intervention in the foreign exchange market to push the $A down by selling Australian dollars and adding to its foreign exchange reserves with the aim of helping growth. It seems unlikely though as it would be criticised by other countries as competitive devaluation and the $A is already low anyway.

Given the issues with some of the unconventional monetary policy measures ‚Äì notably negative interest rates and quantitative easing ‚Äì there may be a better way. This would be for the RBA to work with the Federal Government to use printed money to provide direct financing of government spending or ‚Äúcheques in the mail‚Äù to households with use by dates. While some might say this is just ‚ÄúModern Monetary Theory‚Äù in reality there is nothing ‚Äúmodern‚Äù about it at all (although support for MMT may help clear a path toward it). Such an approach was referred to decades ago as a ‚Äúhelicopter drop‚Äù by Milton Friedman. I was taught at university that government spending can be financed by tax, issuing bonds or printing money. So it‚Äôs nothing new. It‚Äôs been eschewed because of the worry that politicians will misuse it and cause hyper-inflation. But a lack of inflation is the issue now. Such an approach would be guaranteed to boost demand and eventually inflation and the spending could be targeted in a way that is seen as fair. To provide a lasting boost to inflation without running out of control it could be set up to continue until certain objectives are met then gradually phased down. Hopefully, it won‚Äôt come that, but it‚Äôs a preferable option to the hit and miss of just relying on alternative monetary policy measures. In the meantime, more fiscal stimulus could take some pressure off the RBA.

Will the RBA deploy unconventional policies?

The RBA is likely to exhaust conventional easing by cutting the cash rate to 0.25-0.5% before doing unconventional measures beyond forward guidance. The probability of other measures next year is rising. Negative interest rates are unlikely but quantitative easing would likely be included. Ideally this would involve working with the Government to provide a fiscal boost.

There are a number of implications for investors. First, bank deposit rates are likely to fall even further and remain unattractive for a lengthy period yet. Second, the low interest rate environment means the chase for yield is likely to continue supporting commercial property, infrastructure and shares offering sustainable high dividends. The grossed-up yield on shares remains far superior to the yield on bank deposits. Investors need to consider what is most important ‚Äì getting a decent income flow from their investment or absolute stability in the capital value of that investment.

Finally, easy monetary policy in Australia will likely help keep the $A lower than it otherwise would be.

While every care has been taken in the preparation of this article, AMP Capital Investors Limited (ABN 59 001 777 591, AFSL 232497) and AMP Capital Funds Management Limited (ABN 15 159 557 721, AFSL 426455)¬Ý (AMP Capital) makes no representations or warranties as to the accuracy or completeness of any statement in it including, without limitation, any forecasts. Past performance is not a reliable indicator of future performance. This article has been prepared for the purpose of providing general information, without taking account of any particular investor‚Äôs objectives, financial situation or needs. An investor should, before making any investment decisions, consider the appropriateness of the information in this article, and seek professional advice, having regard to the investor‚Äôs objectives, financial situation and needs. This article is solely for the use of the party to whom it is provided and must not be provided to any other person or entity without the express written consent of AMP Capital.