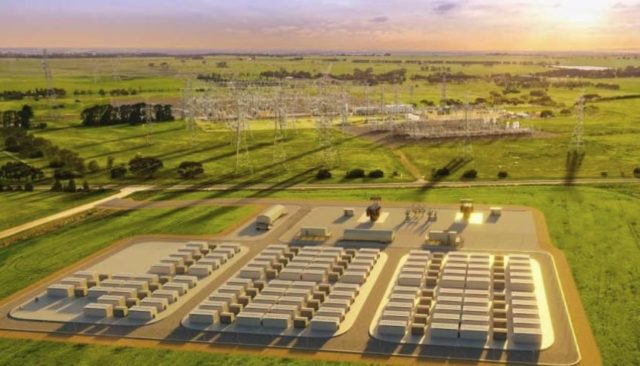 French renewable energy developer Neoen and battery storage giant Tesla have wasted little time getting to work on what will be the biggest battery in Australia, holding a ground breaking ceremony at the site near Geelong with Victoria energy and climate minister Lily D‚ÄôAmbrosio on Tuesday.

The so-called Victorian Big Battery will be 300MW and 450MWh, and is due to come into service within 12 months, when it will overtake the recently expanded ‚ÄúTesla big battery‚ÄĚ at the Hornsdale Power Reserve in South Australia which was also built by Tesla and owned and operated by Neoen.

The Victorian Big Battery will have a specific role to play, satisfying a contract with the Australian Energy Market Operator that will enable it to increase imports from NSW via the main transmission link at peak times in the summer season from November 1 to March 31.

It will also become a major new player in the state‚Äôs energy market for the rest of the time, buying power at low prices and selling during peak periods, ‚Äúfirming‚ÄĚ renewables, as well as providing frequency control and inertia.

The installation has yet to gain final planning approvals from the local shire, but this is expected to be delivered shortly, with construction beginning in a matter of weeks.

The installation will feature 210 Tesla Megapacks, the first time they have been deployed at this scale in Australia, suggesting a considerable amount of reserve capacity. Each Megapack has a capacity of 3MWh, and the entire installation will take no more than an Australian rules football field.

You can see a¬†video of the project here.

‚ÄúWe‚Äôve almost doubled the energy density of the site compared to our previous Powerpack product (used at Hornsdale and other big batteries in Australia). ‚ÄúImportantly, the footprint of the project is significantly smaller than a comparable 300MW Open Cycle Gas Turbine (OCGT),‚ÄĚ a Tesla engineer working on the project said in a recent LinkedIn post.

‚ÄúCoupling this with the fuel being the ability to charge off cheap excess renewables (often negative priced in Australia) and fast-acting network services, this is why we are seeing faster and more flexible battery storage being selected to replace aging thermal generators around the world.‚ÄĚ

In a Twitter post, D‚ÄôAmbrosio wrote; We‚Äôre getting the biggest battery in the Southern Hemisphere, and today we turned the sod on first works just outside Geelong. This 300MW battery will mean we can all benefit from more renewables coming into the grid.

‚ÄúIt will create jobs in construction. It will store solar and wind energy. It shows Victoria is leading the country when it comes to investment in renewables.‚ÄĚ

The Victorian Big Battery may well have the title of the biggest battery in Australia, and one of the biggest in the world, but it could be overtaken quickly by other big battery proposals, including by AGL which is proposing installations of up to 1000MWh at its Torrens Island gas generator in South Australia and up to 800MWh at its Loy Yang A coal generator in Victoria.

There are now five operating big batteries on Australia‚Äôs main grid, and more than a dozen new ones committed or under construction in South Australia, Victoria, NSW and Queensland.