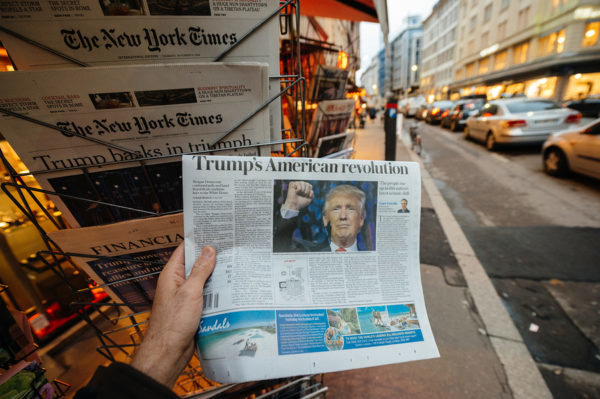 Donald Trump opens his bestseller Trump: The Art of the Deal by bragging how he does not do deals for the money because he has “much more than I’ll ever need”.

“Deals are my art form.

“Other people paint beautifully on canvas or write wonderful poetry.

Trump will be sworn in as the 45th president of the US on Friday (Saturday AEDT) and has vowed to operate from the Oval Office in the White House like a businessman, not a politician, striking “America first” deals.

He says he will immediately kill the Trans-Pacific Partnership trade pact between the US, Australia, New Zealand, Japan, Singapore and seven other Pacific nations.

Trump’s apparent fondness for Russian President Vladimir Putin, criticism of traditional allies, jousting with China and a war of words with the US intelligence community has resulted in confusion.

Is Trump an isolationist?

Is he just pragmatic?

Is he in bed with Russia?

Is Trump and his use of venomous, shaming, exclamation mark-laden Twitter messages part of his strategy to secure America the best deals and, personally, get his kicks?

Trump could be tested early.

Last month Australian ambassador to the US Joe Hockey stood before an audience at California’s Stanford University and issued an ominous warning for Trump.

“Challenges lie ahead because America’s adversaries will see opportunity over the near period,” Hockey, at the end of his 30-minute address inside Stanford’s Encina Hall, said.

Hockey also said he was sure Australia and other allies would continue to stand by the side of a Trump-led America “through thick and thin”.

The former Australian treasurer added he remained confident about the direction of the US and its engagement with the Asia-Pacific region.

Below is a summary of key issues facing Australia with Trump’s arrival.

The TPP is expected to die on Monday with Trump’s signature, but that does not mean the Trump administration will not pursue new free trade agreements he believes favour America.

He calls them “fair trade” agreements.

“I do believe in free trade, I love free trade, but it’s gotta be smart trade so I call it fair trade,” Trump explained in his combined interview with Germany’s Bild and the UK’s The Times newspapers published on Monday.

Trump might eventually sign off on a re-jigged TPP deal, but Hockey told his Stanford audience it would be “fanciful” to believe Australia and other nations would swallow a TPP-style pact slanted more toward the US at their expense.

While Trump has curiously taken a soft, friendly approach toward Russia, he has aggressively targetted China.

Trump has accused China of “robbing us blind”, threatened to slap a 45 per cent tariff on Chinese goods and caused a stir when he took a post-election congratulatory call from Taiwan President Tsai Ing-wen.

Washington DC-based think tank the Peterson Institute for International Economics has warned Trump’s “belligerent trade policies” could unleash a trade war, plunge the US economy into recession and disrupt alliances with nations including “longtime ally Australia”.

Australian Prime Minister Malcolm Turnbull has said he is confident the deal with US President Barack Obama for refugees detained on Nauru and Manus Island to be resettled in America would stand.

With Obama departing the White House and Trump on the way in, the deal appears unlikely to survive if the billionaire sticks to his fierce anti-immigration stance.

Many of the Nauru/Manus held refugees come from terror hotspot nations including Syria, Iraq, Iran, Somalia, Afghanistan and Pakistan.

One of Trump’s first actions in the White House is expected to be suspending the US government program that brought around 12000 Syrian refugees to America last year.

Tillerson, who had extensive business dealings in Russia, agreed Russia “poses a danger” to the US and Mattis called Russia an adversary in key areas.

In what could ramp up pressure on Australia to choose either longtime ally US or its biggest trading partner China, Tillerson and Mattis talked up the need to challenge China and its artificial island building in the South China Sea to ensure freedom of navigation.