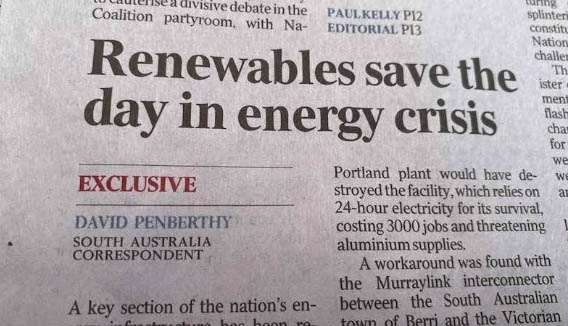 Yes, really, that is what the headline in Rupert Murdoch’s The Australian newspaper said on Wednesday: “Renewables save the day in energy crisis.” And it was, as the headline suggests, a very positive story about renewables in South Australia.

It outlined, as RenewEconomy had done the week before, how renewables played a critical role when storms tore down the towers supporting the main transmission link between Victoria and South Australia, and left the renewables state “islanded”. And placed it at the bottom of page 4.

And yes, it got a few critical things wrong:

For a start, it claimed an “exclusive”, which suggests the Murdoch folk do not read RenewEconomy quite as closely as they should. RenewEconomy published its story last Friday, and it was read by more than 20,000 people: Wind and batteries saved the day when storm cut South Australia adrift.

The Australian’s story also claimed the state “fuelled itself chiefly” through rooftop solar before the state was reconnected to the main grid on Monday afternoon.

That may have been the case for certain times of the day, when the sun did shine and contribute up to 60 per cent of local demand at times in the middle of the day, but the overall contribution of wind energy was far greater – about double that of rooftop and large-scale solar combined over the two and a bit weeks that the state was operating as an effective island.

The only mention of wind – not Murdoch’s favourite technology – was to say that the state was … “even turning off its wind farms for fear that the surplus energy being produced would overload and crash the system.”

Actually, not so much. Four wind farms in Victoria and South Australia were sidelined by the transmission failure, and some output was curtailed at certain times.

But as fossil fuel generators have found over the last century, if there is less demand, you dial down the output. And that’s what the state’s gas generators had to do as well, and while AEMO made sure there was enough “synchronous” generation in the absence of the main link the renewable share was still more than 50 per cent for the most of the time it was islanded.

The Australian’s article did, however, observe the fine work of the Australian Energy Market Operator in maintaining the power supply over the 17-day “crisis”, particularly as the task was complicated by having the Portland smelter in Victoria hanging off the end of South Australia’s small state grid by virtue of the fact that the transmission fault cut the smelter off from the rest of Victoria.

The Australian even mentioned – without any visible signs of a panic attack – the fact that South Australia sourced 55 per cent of its electricity supply from wind and solar over the last year and that AEMO expects that share to rise to 85 per cent by 2025. The state Liberal government has a target of net 100 per cent renewables by around 2030, although it’s likely to get there much earlier.

Still, the positive headline grabbed the attention of at least AEMO chief executive Audrey Zibelman, who re-tweeted the article, and praised the efforts of her engineers. “While it was a great challenge – at AEMO we are feeling extremely proud of what our operators and engineers and industry cohorts have achieved.”

That last comment refers to the working group – comprising AEMO people, network owners and Tesla and Origin Energy engineers – who worked on the maintenance of the grid, and the delicate re-connection and re-synchronisation, having to model hitherto unexplored scenarios.

The event may well prove to be ground breaking in more ways than one, and suggests that AEMO – though criticised by some quarters as being too conservative in the management of its grid – see the crisis evolving in western Victoria – is managing the system better than it appeared in 2016.

As we reported, wind and batteries did play a critical part in keeping the lights on when the storm pulled down the power lines and isolated South Australia on January 31, with the settings on inverters on wind farms, solar farms, rooftop solar PV, and the state’s three big batteries also performing as expected. The three big batteries then became AEMO’s front line defence in the event of further faults on the isolated network.