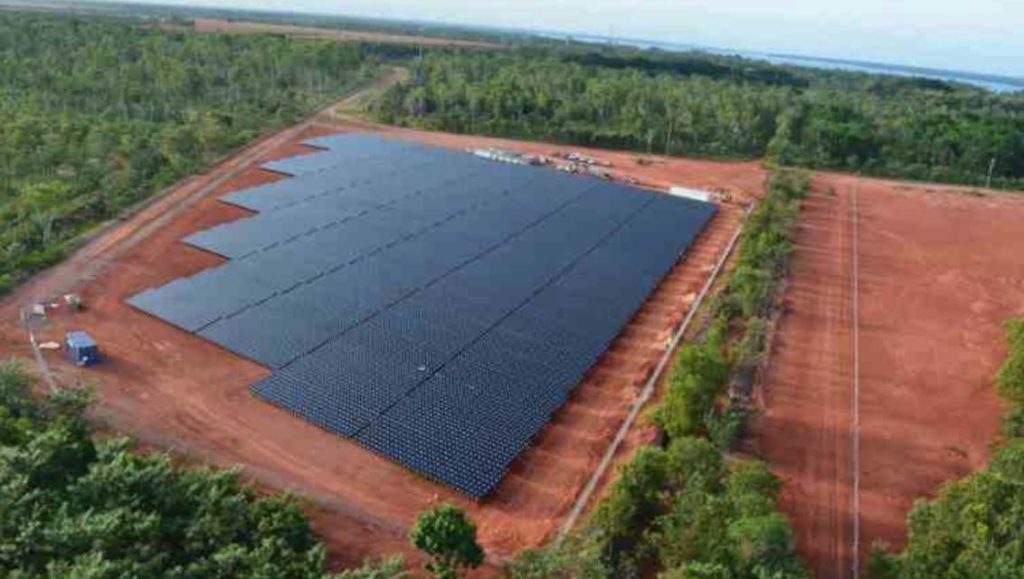 Mining giant Rio Tinto has become the latest major iron ore miner in West Australia’s Pilbara region to turn to renewables to lowest costs and cut emissions, announcing that a new solar farm and a lithium ion battery will supply all the daytime electricity needs and two thirds of the annual requirements of its new $2.6 billion Koodaideri project.

Rio Tinto says it will spend $98 million on a new 34MW solar farm at the Koodaideri mine in the Pilbara,  as well as a 45MW/12MWh lithium-ion battery energy storage system that will help power its entire Pilbara power network.

“The 34 megawatt solar photovoltaic plant is expected to supply all of Koodaideri’s electricity demand during peak solar power generation times and approximately 65 per cent of the mine’s average electricity demand,” the company said in a statement.

It will be Rio Tinto’s first company-owned solar facility, although it also has a small solar facility located at its bauxite mine in Weipa.

Rio Tinto joins other iron ore majors in the Pilbara also shifting to solar and battery storage because of the lower costs. Andrew “Twiggy Forrest’s Fortescue Mines announced last month that it will build an extra 150MW of solar, and a big battery, as it links up all its iron ore resources in the Pilbara into a single network for the first time.

This solar and battery will be additional to the 60MW solar farm being built by energy provider Alinta near the Chichester mine owned by Fortescue, as well as the 30MW/12MWh big battery at its Newman gas generator which has dramatically lowered costs and lifted reliability for mines including Gina Rinehart’s Roy Hill mines, which is also looking at solar and other renewable options.

Oz Minerals last week announced that it is looking for wind, solar and battery storage to provide 80 per cent of the electricity needs for its proposed $1 billion West Musgrave mine near the border of Western Australia and the Northern Territory, while others including Element25 are looking for at least 50 per cent renewables, and possibly up to 90 per cent, for a new magnesium metals operation in the Pilbara.

Rio Tinto said its solar plant will cover around 105 hectares, comprise an estimate 100,000 panels and should be completed in 2021. The new 12MWh battery in Tom Price will provide spinning reserve generating capacity to support a stable and reliable network, in much the same way as Alinta has demonstrated at Newman.

Rio Tinto flagged its interest in renewables and storage last year when canvassing options for the expansion of its iron ore operations in the Pilbara. Its biggest rival, BHP, will source 100 per cent renewable energy for its Chile copper mines, and it is still going through tender submissions for its Australian operations, which include iron ore in the Pilbara and the giant Olympic Dam project in South Australia.

“The construction of our first solar plant in the Pilbara is a significant milestone for the business and an important step in reducing our carbon footprint in the region,” Rio Tinto iron ore chief executive Chris Salisbury said in a statement.

“We are investigating additional renewable energy options in the Pilbara, as well as other opportunities to reduce emissions across our entire global portfolio, building on the 43 per cent reduction in absolute greenhouse gas emissions since 2008.”

Salisbury said Rio Tinto is working to define new emissions reduction targets from 2020 as part of its “transition to a lower carbon world.”

A spokesman for the company said the “additional renewable energy options” could include more solar, the addition of wind energy, or more battery storage.

The wind resources in the region are considerable, and the Asia renewable Energy Hub, which includes CWP, Vestas and Macquarie Bank, plans to use wind to provide the bulk of the 15GW of renewable energy capacity it is considering to power local industry and to provide a clean export fuel to Asia.

The $2.6 billion Koodaideri mine was approved in November last year with construction commencing earlier this year. Production capacity will be 43 million tonnes annually with first production is expected to commence by the end of 2021.

The solar plant and battery are estimated to lower annual carbon dioxide emissions by about 90,000 tonnes compared to conventional gas powered generation. This is the equivalent of taking about 28,000 cars off the road, the company said in a statement.

A tender for suppliers will be held early this year.