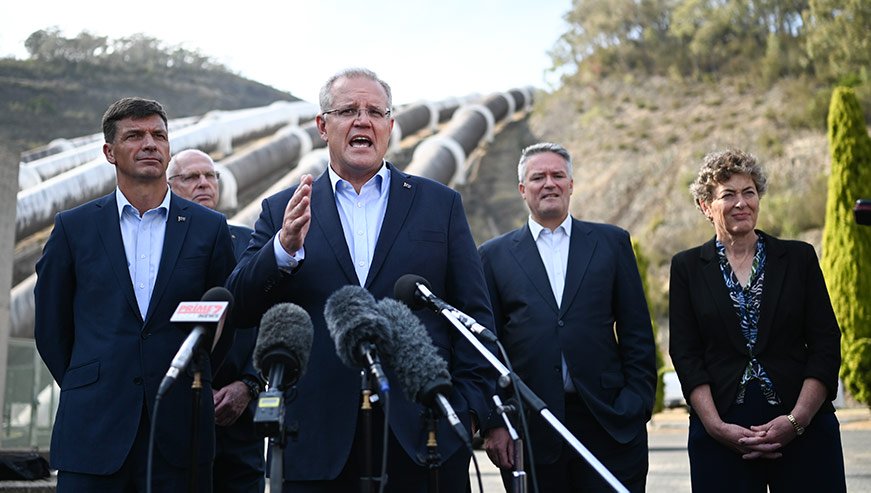 The federal government’s massive Snowy 2.0 pumped hydro project appears to have cleared all regulatory hurdles after being granted federal environmental approvals on Tuesday – just days before a key by-election in the local electorate of Eden-Monaro.

The announcement of the Snowy 2.0 environmental approval was made by prime minister Scott Morrison at Lobs Hole in the Snowy Mountains, who was joined by environment minister Sussan Ley and energy minister Angus Taylor, whose grandfather was chief engineer of the original Snowy Hydro scheme.

The approval was never really in doubt, given the federal government’s ownership of Snowy Hydro, and its investment in the scheme, despite protests from environmental groups, energy experts and the National Parks Association of NSW. And the timing is highly political.

The Snowy 2.0 project – first promoted by Malcolm Turnbull – will see the Snowy Hydro scheme expanded to include Australia’s largest pumped-hydro energy storage project to date, and while the final cost of the project still remains uncertain, some suggest it could be around $10 billion, including transmission.

“This marks the final step in the planning and approvals phase and the beginning of a new wave of jobs and investment for the region, which will guarantee clean, affordable energy and position our country for the future,” prime minister Scott Morrison said.

“Just as the original Snowy Hydro project brought jobs and prosperity to Australia after the Second World War, Snowy 2.0 will help Australia grow its way out of the economic challenges from the coronavirus.”

The approval came with a selection of additional conditions, which will include an investment by Snowy Hydro of around $100 million in biodiversity and environmental measures within the Kosciusko national park.

Snowy Hydro will also be required to contribute up to $73.8 million into an environmental offset fund to be managed by the NSW National Parks and Wildlife service.

“Not only has the approval paved the way for critical infrastructure that will help the environment, it has ensured vital funding for protecting the area’s biodiversity,” Sussan Ley said.

“The approval process ensures the development is built and operated in a way that sensitively avoids, mitigates and rehabilitates environmental impacts while protecting the environment and its rich biodiversity as we move to a clean energy future.”

The Snowy 2.0 project will expand the Snowy Hydroelectric scheme with an additional 2,000MW of generation capacity and is expected to add up to 350,000 MWh of energy storage by linking the Talbingo and Tantangara reservoirs, although analysts suggest it will never be used to its full capacity.

When the project was originally floated under the Turnbull government, the project was estimated to cost around $2 billion. However, after a detailed analysis of the works required, the forecast cost of the project stands at more than $5 billion. Transmission costs, and new lines to the NSW and Victoria grids, will add several billions more.

The federal environmental approval follows the granting of planning approval from the NSW state government, which included both the main works site within the Snowy Hydro scheme, as well as a tunnel segment factory to be established in Cooma.

The National Parks Association of NSW estimated that to facilitate the entire Snowy 2.0 expansion, as much as $10 billion in expenditure could be required, with the environmental group leading calls for the project to be suspended until its full cost, and environmental impacts could be independently assessed.

Snowy Hydro has repudiated the claims, insisting that the project stacks up financially.

The project, however, has enjoyed an expedited regulatory approval process from both the NSW and Federal governments, as they each look to speed up major investments in new infrastructure to stimulate a Covid-19 impacted economy. An approach slammed by the National Parks Association.

“The Minister’s approval under the Environment Protection and Biodiversity Conservation Act for such a destructive proposal signals the failure of our national environmental laws,” executive officer of the National Parks Association of NSW Gary Dunnett said.

“Last week the Australian National Audit Office published a damning report of the way the Commonwealth sidesteps the protection of matters of national environmental significance, and today we see that failure play out in their refusal to protect the threatened species and National Heritage listed landscapes of Kosciuszko.”

“Today’s decision will go down in history as an appalling assault on one of Australia’s most fragile and precious of national icons, Kosciuszko National Park.”

It’s convenient timing for the Morrison government less than a week out from a hotly contested Eden Monaro by-election where the government will hope it can take the seat off the Labor party following the retirement of the previous Labor member Mike Kelly.

After a fraught pre-selection contest, the Liberal party selected Fiona Kotvojs as their candidate for the by-election contest, to be held on 4 July, who has previously expressed questionable views on climate change and renewable energy.

The Snowy 2.0 project is expected to deliver as many as 4,000 new jobs in the Eden Monaro electorate at the peak of its construction phase, in addition to the substantial workforce Snowy Hydro already employs in the region.