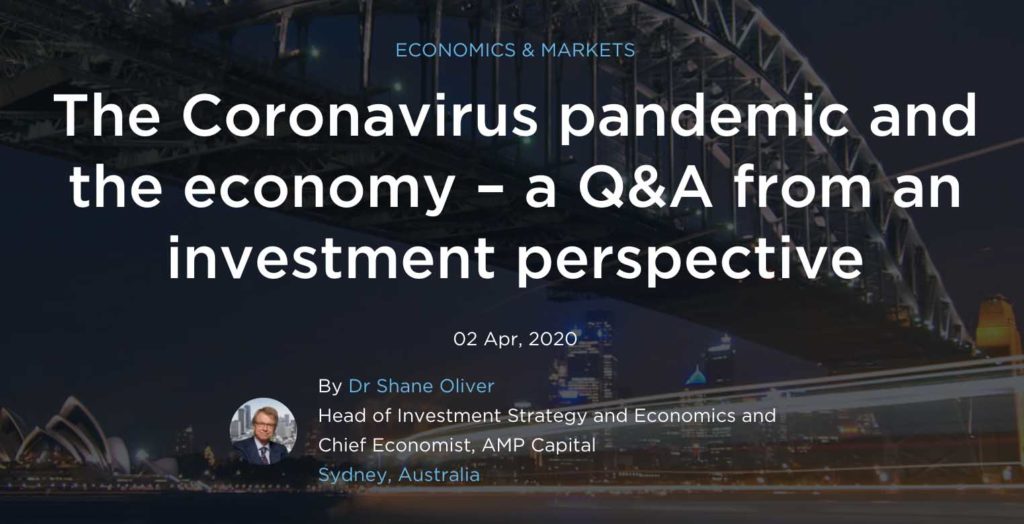 We are more likely to see a U-shaped recovery than a V or L.

Along with the horrible human consequences, the coronavirus pandemic is having a huge impact on the way we live and as a result investment markets. This has raised a whole bunch of questions: why does a big part of the economy have to go into “hibernation”? how long might it be for? how big will the hit to the economy be? what does it mean for unemployment? why is it so important for governments and central banks to protect businesses and workers? can we afford all this stimulus? This note provides a simple Q&A for most of the main issues from an economic & investment perspective. To the extent simple answers are possible in this environment!

Why do we need the shutdowns?

This is a medical issue, but it drives everything that follows. The answer is simple. Something like 15% of those who get coronavirus need hospitalisation and 5% need intensive care. And this is not just elderly people. And there is little to no community immunity to it. So, if a lot of people get it at once the hospital system can’t cope and the death rate shoots higher. Italy shows this with a death rate of 11.7%. So, unless we want to see the same surge in deaths as Italy we have to “flatten the curve” of new cases so the hospital system can cope. And to do this we have to practice social distancing which means meeting up with as few as people as possible which means staying at home wherever possible. This in turn means a big part of the economy gets shutdown.

Which sectors of the economy are most impacted?

Roughly 25% of the economy is being severely impacted and this covers discretionary retailing, tourism, accommodation, cafes, clubs, bars and restaurants, property and various personal services. But there is also likely to be a flow on to construction and parts of manufacturing as uncertainty leads to less housing construction for example. Only about 20% of the economy – communications, healthcare and public administration – will really get a boost.

How big will the hit to the economy be?

It’s impossible to be precise, but if 25% of the economy contracts by 50% with other sectors offsetting each other, that will drive a 12.5% detraction in economic activity mainly in the June quarter which is basically what we are assuming. This will the biggest hit to the economy seen since the Great Depression. Of course, if this leads to collateral or second round effects as, for example, businesses and households default on their loans the impact could be much greater and longer.

But why all the talk of hibernation?

The hibernation concept is a good way to look at it. As a result of the shutdown many businesses are seeing a massive loss in their sales and some must partially, or in many cases fully, shutdown until the virus is contained and the shutdowns can end. But rather than shutdown forever the best outcome is for them and their employees to effectively go into “hibernation” for a period so they can go back into business and resume their normal lives once the virus is under control but without being encumbered with so much more debt and rent arrears, etc, that they go bust anyway.

Why the need for massive government support?

This is where government and central bank action comes in. Since coronavirus became a global pandemic last month and countries progressively ramped up social distancing policies, governments and central banks have swung into action to help economies weather this storm. This is absolutely necessary. Such support is unlikely to stop a recession or depression like contraction in the economy. But it’s needed to minimise the collateral or second round impacts of the shutdowns and enable the economy to start up again when the threat from the virus abates. Australia has announced three fiscal stimulus tranches now totalling around $200bn or 10% of GDP, which is nearly double that of the GFC stimulus. Other countries have also announced massive stimulus with the US just signing off on one package worth $US2 trillion and now talking of another. The policy response is now of a magnitude that it’s starting to tip the risk scales against some sort of long depression/recession.

How will it be paid for?

Simple, the Government will issue bonds & borrow the money.

But can we afford such a surge in the deficit and debt?

First, to stress it’s absolutely necessary. The hit to the economy from the shutdowns could be 10 to 15% of GDP. This requires a similarly sized stimulus program to offset it otherwise we risk immeasurable collateral damage to the economy and people’s lives (causing an even bigger budget deficit).

Second, it makes sense for the public sector to borrow from households and businesses at a time when they are stuck at home and can’t spend due to the shutdowns or won’t spend due to uncertainty and for the Government to give the borrowed funds to help those businesses and individuals that are directly impacted. Using the funds to subsidise wages is a particularly smart move as it keeps people employed and keeps them linked to their employer. The trick is to curtail the stimulus once the economy bounces back otherwise the competition for funds will boost interest rates and create problems for the economy. So, the support programs are set to end after 15 months.

Third, Australia’s public debt is relatively low. Net public debt as a share of GDP is a quarter of what it is in the US. So, Australia has far greater scope to do fiscal stimulus than other countries.

Fourth, the cost of borrowing for the Federal Government is very low at just 0.25% for three years and 0.75% for ten years.

Finally, the budget blowout may risk a downgrade in Australia’s AAA sovereign debt rating, but Australia’s public finances will still look better than others. And I would rather a rating downgrade than a deep depression/recession any day.

When the dust settles Australia will be left with higher net public debt at maybe around 45-50% of GDP. It will be the price we paid to (hopefully) minimise the loss of life from the virus and at the same time minimise the hit to people’s livelihoods from the shutdown. This may necessitate forgoing the next round of tax cuts or a new deficit levy. And it may put a burden on future generations as wartime spending did. But I reckon that’s a cost most Australians are prepared to wear.

Why is monetary stimulus necessary? Low interest rates won’t get us to spend when we are stuck at home

Yes, people can’t spend much now, but as with government stimulus much of the central bank easing has been aimed at “protecting” the economy. This has three key elements:

How does quantitative easing help the government stimulus measures? Won’t it cause inflation?

Quantitative easing – which the RBA has now joined the Fed, ECB and Bank of Japan in doing – involves using printed money to buy government bonds in order to help keep interest rates down. The central bank buys these bonds in the secondary market (eg from fund managers) so it’s not directly providing the money to the government and those bonds must still be paid back when they mature. So, it’s not really “helicopter money” – which would see the RBA print money and give it to the Government which it would then spend. But of course, it is aiding the government’s stimulus program by helping to keep bond yields down. In the meantime, the balance sheet of the RBA will rise as it holds more bonds, but this is not a major issue unless inflation starts to rise due to all the extra printed money in the system. The Fed, ECB and Bank of Japan have been doing QE for years with no rise in inflation, so the RBA has a long way to go before it becomes a problem. Put simply there is no magical right or wrong level for the RBA’s balance sheet so if you are worried about it, just ‘chillax’.

How high will unemployment go?

We see unemployment rising well above 10% in the US (possibly to even 25%). But in Australia, there is a good chance that the Government’s wage subsidy scheme will keep up to 6 million workers in the most affected parts of the economy in a job and this may contain unemployment to below 10% here. The decline in unemployment though will likely be slow though depending on the shape of the recovery.

Will the recovery in the level of economic activity look a V, a U or an L?

Much will depend on how long it takes to control the virus. An L shaped (or no real) recovery is unlikely given: evidence that shutdowns will slow down the number of new cases as occurred in China and may now be starting to occur in Italy; the chances of a medical breakthrough; and all the stimulus which should aid some sort of recovery. By the same token a quick V style recovery is unlikely given that absent a quick medical solution the shutdowns will be phased down only gradually (with international travel being perhaps the last restriction to be removed). This suggests a U-shaped recovery is most likely.

Could anti-virals or a vaccine improve the outlook?

Put simply yes. A study of past epidemics and the medical response to them by my colleague Brad Creighton shows an ability of governments working with scientists and the medical community to rapidly speed up the development and deployment of anti-virals and vaccines. There is now a massive global effort on this front and some drugs are promising. So, it’s not out the question that there is a breakthrough enabling a quicker relaxation of shutdowns.

When will shares recover?

The historical record of share markets through a long litany of crises tell us they will recover and resume their long-term rising trend. The massive global policy response to support economies in the face of coronavirus driven shutdowns is starting to tilt the risk scales against a long depression scenario. This is why share markets have started to get some footing over the last week or so after seemingly being in free fall for a month. Key things to watch for a sustained bottom are: signs the number of new cases is peaking – with positive signs emerging in Italy; the successful deployment of anti-virals; signs that corporate and household stress is being successfully kept to a minimum – too early to tell; signs that market liquidity is being maintained and supported as appropriate by authorities – this has improved; and extreme investor bearishness – investor panic is already evident but it can get worse.