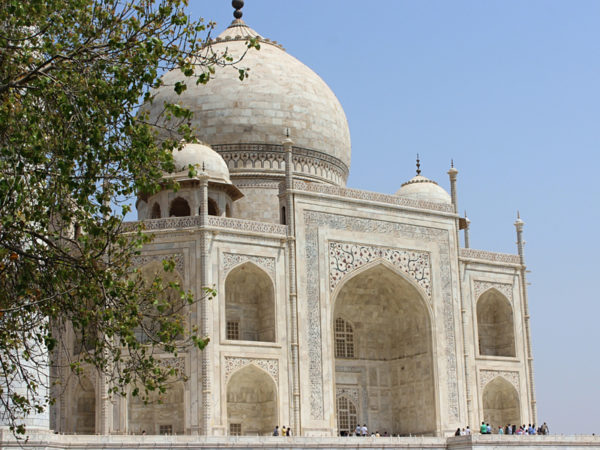 Whatever the budget for your trip to India, a pilgrimage to its most famous attraction should be on your list. On my third visit to the Taj Mahal over more than 50 years, I’m thrilled by how it never loses its magic, but aware that a little information can help first-time visitors feel more relaxed as they marvel at its beauty.

There are always crowds, but the number of people cramming the monument will depend on the time of year. Peak India sightseeing time is in the cooler months, from October to March. When it’s hotter there will be less people, but even for heat-experienced Aussies it’s no fun sightseeing in 38C-plus temperatures. India’s high pollution levels mean motor vehicles are banned for a kilometre around the Taj. You can walk (bring water), take a horse-driven carriage, an electric “bus”, or order a golf buggy if you’re staying at a nearby plush hotel.

It’s totally possible to visit the Taj Mahal on a day trip from Delhi, especially now there’s a new tolled highway cutting transport time down to around two to three hours. You can get picked up about 3am and snooze in an air-conditioned bus to arrive in time for a sunrise tour, watching as the Taj blushes from pink to its snowy whiteness. But for those who want to spend some time with the magnificent Mughal architecture, there are many accommodation options in Agra itself. Your tour could then include a visit to nearby Fatehpur Sikri, the Mughal capital, which is worth at least a whole day on its own.

Most tours will include transportation on electric vehicles similar to golf carts for the final car-free kilometre to the gates of the Taj. The price range of the tours will depend on the size of the group, and should include the admission price and ticketing before you get there. Guides will give you plenty of time to take your perfect picture, they’ll be able to speed your trip through security and will ensure you don’t try to bring in forbidden items.

The powers that be haven’t yet caught up with the fact that many digital cameras and phones are now capable of taking video, so the ban on bringing video cameras into the grounds seems a little unnecessary. Those with shaky hands will have to improvise because tripods will also be confiscated. Selfie sticks are permitted but one of our group was told to leave hers behind, as it had a tripod function on its base. Large bags will hold up your security screening and only invite theft in crowded places anyway, so sling your camera round your neck.

Your guide will have plenty of information for you as you wander around the Taj, but knowing a little of its history before you go will only add to your amazement and delight. It’s a mausoleum and not a temple or a mosque, although the mosque on the grounds means it’s closed on Fridays. Yes, it’s made of white marble but its decorations come from inlays of black marble and semi-precious stones like onyx, coral, jade and lapis lazuli. It’s currently being cleaned by hand, involving scaffolding and a “mud-pack” of the absorbent clay known as fuller’s earth. And for those who’ve never read about Shah Jahan and Mumtaz Mahal, it’s a must to understand why their tale of romance has lasted 600 years.

Despite the fact this building is one of the most iconic sights in the world, it will still evoke wonder when you step through the entrance gates and see it for the first time. Consider planning your trip to coincide with the full moon for what’s been described as the ultimate way to see the Taj. Whatever you do, it’s worth taking your time.

GETTING THERE: Jet Airways flies daily to Delhi from Singapore, and Qantas flies direct daily to Singapore from Sydney, Melbourne, Brisbane and Perth.

STAYING THERE: The Leela Palace in Delhi is a five-star hotel offering every luxury the traveller could imagine, with rooms from around $350 per night.

PLAYING THERE: Bespoke tours to the Taj Mahal are easily arranged through the concierge at the Leela Palace, or you may choose to book online with a number of operators from around $US100.

* The writer travelled as a guest of Preferred Hotels & Resorts, The Leela Palace Delhi and Jet Airways in association with Qantas.