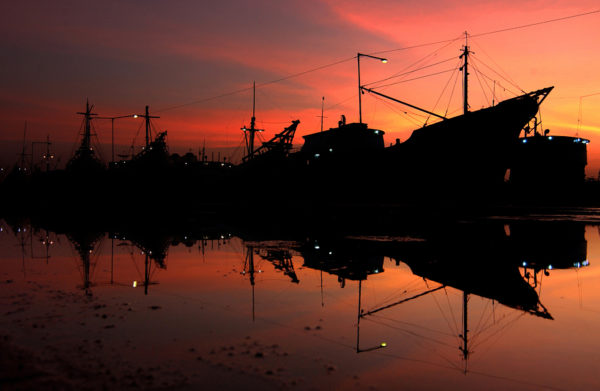 If you dream of sailing the waters of the Flores Sea on the lookout for Komodo dragons on passing islands, a phinisi should be your vessel of choice.

A phinisi is a traditional Indonesian two-masted sailing ship that can take you to the main islands of Komodo National Park: Komodo, Rinca and Padar. The wooden vessel will allow you to lie back, enjoy the breeze and take in the scenery as you’re transported between each trek, dive, snorkel or swim.

And with any luck, there’ll be a fiery sunset to capture on the way home.

Phinisis vary in length from 15 to 35 metres. Originally sail boats, most have engines these days but retain their rigging and sails. Today phinisis are mainly used as inter-island cargo carriers and as tourist tour boats.

The first phinisis were thought to have been modelled on the Dutch pinas that came to the region around 1600, and were used to transport cargo during Dutch colonial times and as warships during fights for independence.

Today, there are cabins on live-aboard ships for longer journeys that usually accommodate two people. Most set sail from Labuan Bajo, on the western tip of Flores. But there are trips from other places, including Pelabuhan Sape, eastern Sumbawa, or Kanawa Island, west of Labuan Bajo.

We headed out from Labuan Bajo at the early hour of 4am. But there’s that much to fit into the day.

Once on board, some of us settle into a cabin for a couple of hours more sleep. Others lay on the thick cushioning covering the large centre area of the deck for a pleasant, alfresco snooze under the stars, accompanied by the gentle lapping of the waves.

We head to Padar, a small island between Komodo and Rinca. It’s rugged, with steep volcanic mountains, deep bays and beautiful beaches of different colours – but sadly no Komodo dragons.

We trek to the top of a ridge, which is tough in the heat, but well worth it as we look out over rugged peaks of green sweeping down into deep, turquoise water.

One of the most spectacular sights on Padar is the peculiar Pink Beach, which gets its colour from fragments of red coral.

From our hike, we return to the boat and head off for a relaxing snorkel amid schools of fish large and small, and plenty of pretty coral.

As well as great places for a hike, or a stroll, followed by a well deserved rest on a serene beach, Padar is a great place to swim or snorkel with several notable diving sites and a host of other tempting places, each with their own appeal.

But you don’t have to sticks to just Padar, there are squillions of great spots in Komodo National Park.

At Manta Point, you can swim with a manta ray or two. Bidadari Island has long white sandy beaches, wonderfully clear water, colourful fish and corals – all perfect for snorkelling or scuba diving. But Castle Rock on Gili Lawa Island may possibly be the best, especially for diving. Here you can see black- and white-tipped sharks, giant trevallies, tuna schools and sometimes even dolphins.

After our snorkel and a tasty lunch on board the phinisi, we head to Komodo – the island which gives its name to the national park and its key resident, the Komodo dragon.

Rinca Island also has Komodo dragons – more even – but it is to Komodo that most tourists go. It has several trails or differing length and difficulty along which you may see one of these giant reptiles more reminiscent of the dinosaur era than modern day. But the best spot is known as the Kitchen, where you’ll usually find several lounging around looking lazy, waiting for a bite to eat.

Don’t be fooled by their heavy, cumbersome gait; Komodos can outrun a human and eat prey the size of a water buffalo or deer.

Komodo dragons – which can grow to more than three metres and weigh up to 91kg – do attack if irritated, so don’t get too close. But they’re usually happy to be photographed from a distance.

After snapping a few money shots, it’s time to head back to the phinisi and to Labuan Bajo.

But there’s one more fantastic sight in store: a glorious, fiery sunset. A perfect end to a memorable day.

You can organise a Komodo tour from Denpasar but it is better to go to Labuan Bajo and get a tour from there. The writer flew from Denpasar to Maumere on Flores by Wings Air, then drove from Maumere to Larantuka (four hours), before flying to Labuan Bajo via Kupang in West Timor (with Nam Air then Garuda). At Labuan Bajo she set sail for the Komodo National Park islands with PT Flores Komodo Tours (www.flores-komodotours.com)

Larantuka: The ASA Hotel offers rooms from $A49 a night. Visit: asahotel-larantuka.com/

Labuan Bajo: La Prima Hotel, on the beach, has a swimming pool and fitness centre. Rooms from $A106 per night, including breakfast. laprimahotel.indonesiaroom.com/

PLAYING THERE: You can take a day tour from Labuan Bajo to Komodo Island aboard a phinisi with PT Flores-Komodo Tours, who offer various tour options (www.flores-komodotours). If you’v e had enough of the dragons, Komodo Island also offers hiking, swimming, snorkelling and diving options.

* The writer was a guest of the Indonesian Ministry of Tourism.