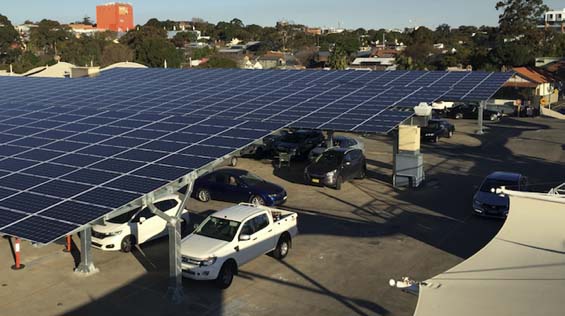 MarketPlace Leichhardt in Sydney‚Äôs trendy inner west has made smart use of the shopping centre car park by installing rooftop solar panels that double as shading for vehicles. According to Trina Solar‚Äôs Govind Kant, more shopping centres are adopting solar energy because it makes good sense: electricity generation peaks during the day and that‚Äôs when shoppers are out and about.

Many commercial building owners also want to reduce their carbon footprint and achieve carbon neutral certification, and be less dependent on electricity from the grid and cut costs, he said.

The solar panels used in the 305kW phase one of the project are coated in a special clear polymer that protects each 60-cell monocrystalline module from the sun, but also allows light to penetrate through.

Phase two, which is due to be completed by year-end, will increase the installation‚Äôs capacity to around 430kW.

Combining these in a single product solution achieves a better levelised cost of energy and simplifies installation, with the patented fast-installation structure enabling modules and trackers to be installed up to three times faster than industry averages, Trina claims.

Systems integration is becoming increasingly important, because solar systems are becoming more complex. In the effort to gain higher levels of power output, more parts and components are being added, such as smart trackers.

The increasing prevalence of bifacial solar is driving adoption of trackers.

The integration of smart trackers into TrinaPro can provide up to a 6 per cent power boost for Trina Solar DuoMax bifacial solar modules by angling them to reduce the effect of shading, Holger Schenk of Trina Solar Asia-Pacific explained.

‚ÄúTracker technology can also be used to protect solar panels from hailstorms, which occur in some parts of Australia. The tracker can angle the panel to be perpendicular to the ground.‚Äù