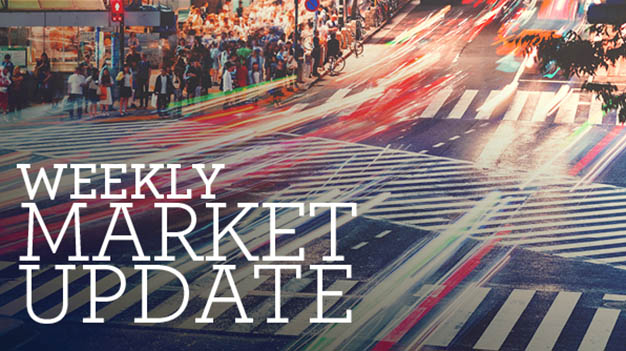 Investment markets and key developments over the past week

Global share markets were volatile again over the last week as bond yields backed up further continuing the latest ‚Äútaper tantrum‚Äù that was kicked off by several central banks led by the ECB just over a week ago.¬ÝHowever, news of solid jobs growth helped US shares gain on Friday resulting in a weekly rise of 0.1%. Eurozone shares rose 0.5% for the week, but Japanese shares lost 0.5% and Chinese and Australian shares fell 0.3%. Bond yields continued to rise partly in response to the minutes from the last ECB meeting which indicated it considered dropping its easing bias (but decided against it because it might trigger a tightening in financial conditions – which of course has happened anyway!). Commodity prices slipped and this combined with a still neutral RBA contributed to a fall back in the A$, which is continuing to bounce up and down in the same US$US0.72-78 range it‚Äôs been in for more than a year now.

The back up in bond yields in response to a shift to a somewhat more hawkish tone from several central banks could have further to run, but for shares it‚Äôs likely just another correction.¬ÝAfter strong gains and signs of investor complacency shares and bonds have been vulnerable to a correction for some time. The first ‚Äútaper tantrum‚Äù in 2013 which was kicked off by then Fed Chair Ben Bernanke‚Äôs comments around slowing or tapering the Fed‚Äôs quantitative easing program saw share markets fall 6-11% and 10-year bond yields in the US and Australia rise by around 140 basis points. However, we remain of the view that the latest taper tantrum will settle down. The only reason central banks have become a bit more hawkish is because global growth has improved which in turn is good for profits and shares, monetary tightening by the ECB and other central banks even when it does get underway will be very gradual (with the recent back up in bond yields and the Euro likely to further slow the ECB) and it will be a long time before global monetary policy is tight and hence threatening to shares. So expect the correction in shares to remain just that and the uptrend in bond yields to remain gradual (despite occasional spurts higher).

Of course, in Australia the RBA has not even joined the hawkish tilt of other global central banks.¬ÝIn fact, after its July meeting the RBA retained a neutral bias in terms of the outlook for monetary policy. Not following other central banks with a hawkish tilt was a good move because not only would it have been premature and unnecessarily scared the horse as one Board member put it, but the failure to do so helped knock the A$ a bit lower. Our view remains that the RBA will be on hold for the next year at least, with risks around the consumer and a housing slowdown preventing hikes but a fading in the drag from the mining investment slump and solid employment growth heading off cuts. A recent good run of data in Australia ‚Äì for jobs, retail sales and trade ‚Äì has seen the risk of another rate cut in the short term recede.

North Korea is back in the headlines as a threat to the world and as a source of investment risk¬Ýfollowing the testing of an Intercontinental Ballistic Missile which looks to have been designed to achieve maximum annoyance ahead of the July 4 Independence Day holiday in the US. North Korea‚Äôs progress towards being able to reach the US with nuclear weapons is clearly continuing. This led to the usual condemnation from western countries and talk of sanctions. But it‚Äôs a tough one: a military strike against North Korea is obviously being considered again but the likely catastrophic consequences for Seoul/South Korea and potentially Japan mean that some form of diplomatic solution to contain the threat is more sensible and hopefully more likely. North Korea could be a source of further volatility in share markets, but trying to protect investment portfolios against the threat it poses (beyond buying defence stocks and safe havens like government bonds, cash and gold) is a bit like trying to hedge against the risk of nuclear war in the post war era.

New Zealand is showing Australia up.¬ÝNot only do they have a sensible energy policy and climate change strategy, a sensible tax system, budget surpluses, falling public debt and faster broadband all achieved with a fraction of the angst Australia seems to go through‚Ä¶but they have just won the America‚Äôs Cup! Which is something we did once when we were about to embark on a roughly twenty year run of economic reforms. Sporting achievements aside, our populist Senate and bouts of ideological and/or personality driven politics in our major political parties is working against our national interest.

US data was solid.¬ÝThe ISM manufacturing and services conditions indexes rose to strong readings above 57 and while the Markit PMIs are a bit softer, overall it suggests that US businesses are doing well. Payroll employment was strong in June and even though unemployment rose slightly this was due to higher labour force participation. And core capital goods orders were also revised up to show a small rise in May. Against this construction data for May was soft and wages growth continued to remain subdued at just 2.5% over the 12 months to June. The minutes from the last Fed meeting added little that was new with debate over when to start letting the Fed‚Äôs balance sheet run down (ie reversing quantitative easing) and the case for letting the labour market run a little hot against the risks regarding financial stability of leaving interest rates too low for too long. Overall, we are inclined to see the Fed announce the start of the balance sheet run-off in September and then wait to December given recent soft inflation data before raising rates again. The ‚ÄúGoldilocks‚Äù June jobs report with solid jobs growth but weak wages growth keeps the Fed on track to tighten but only gradually.

Eurozone manufacturing and services conditions PMIs for June were revised up to solid levels consistent with solid growth.¬ÝWhile strong growth indicators point to the ECB reducing its quantitative easing program for next year (from ‚Ç¨60bn a month to ‚Ç¨30bn a month) the back up in bond yields and the Euro, low inflation and risks around Italy suggest that this is unlikely to be announced until late this year and that the first rate hike won‚Äôt occur until late next year.

Chinese business conditions PMIs mostly rose in June¬Ýconsistent with a stabilisation or modest improvement in growth after a modest slowing.

Australian data was mostly on the strong side.¬ÝThe Australian Industry Group’s business conditions PMIs were solid in June, retail sales rose nicely for the second month in a row in May pointing to solid consumer spending in the June quarter, the ANZ job ads survey remained strong pointing to solid jobs growth and the trade surplus rebounded in May as coal exports recovered after the impact of Cyclone Debbie and gas exports rose strongly as LNG projects complete. However, it would be wrong to break out the champagne just yet as building approvals fell sharply in May confirming that home building activity is set to slow and low wages, high
underemployment and the July surge in power prices will weigh on consumer spending going forward. In other data, home prices bounced back in June after seasonal weakness in May but momentum in Sydney and Melbourne is continuing to slow and the Melbourne Institute’s Inflation Gauge showed continuing benign inflation.

In the US, expect continued strength in small business confidence and job openings (Tuesday), retail sales and industrial production to show solid growth¬Ýand core consumer price inflation (all due Friday) to remain around 1.7% year on year. Fed Chair Yellen‚Äôs Congressional Testimony (Wednesday and Thursday) will be watched for clues on the outlook for US monetary policy. The Fed‚Äôs Beige Book of anecdotal evidence on the economy is likely to remain stuck in ‚Äúmodest to moderate‚Äù mode in terms of the characterisation of the US economy. US June quarter earnings will start to flow with analysts‚Äô consensus looking for a 7.4% year on year rise in earnings but the final outcome likely to be around +10%.

In Australia, expect housing finance (Tuesday) to have risen after three months of falls,¬Ýbusiness confidence and conditions to remain reasonably solid in the June NAB business survey (also Tuesday) and consumer confidence (Wednesday) to have remained a bit below average in July.

Shares are vulnerable to a further short term setback¬Ýas we go through the seasonally weak September quarter with the back up in bond yields on central bank exit talk looking like it has further go and risks remaining around President Trump and North Korea. However, valuations remain mostly okay ‚Äì particularly outside of the US, global monetary conditions are set to remain easy and profits are improving on the back of stronger global growth, so we continue to see the broad 6-12 month trend in shares remaining up. Australian shares are likely to end the year higher but will likely remain relative underperformers compared to global shares.

Low yields and a gradual uptrend in them point to low returns from sovereign bonds.

Unlisted commercial property and infrastructure are likely to continue benefitting from the ongoing search for yield,¬Ýbut this will wane eventually as bond yields trend higher.

National residential property price gains are expected to slow, as the heat comes out of Sydney and Melbourne. Perth and Darwin are near the bottom and other capitals are likely to see moderate growth.

Our view remains that the downtrend in the A$ from 2011 will resume this year.¬ÝThe rebound in the A$ from the low early last year of near US$0.68 has lacked upside momentum, the interest rate differential in favour of Australia is continuing to narrow and will likely reach zero early next year (as the Fed hikes rates and the RBA holds). Expect a fall below US$US0.70 by year end.

Important note: While every care has been taken in the preparation of this document, AMP Capital Investors Limited (ABN 59 001 777 591, AFSL 232497) and AMP Capital Funds Management Limited (ABN 15 159 557 721, AFSL 426455) make no representations or warranties as to the accuracy or completeness of any statement in it including, without limitation, any forecasts. Past performance is not a reliable indicator of future performance. This document has been prepared for the purpose of providing general information, without taking account of any particular investor‚Äôs objectives, financial situation or needs. An investor should, before making any investment decisions, consider the appropriateness of the information in this document, and seek professional advice, having regard to the investor‚Äôs objectives, financial situation and needs. This document is solely for the use of the party to whom it is provided.