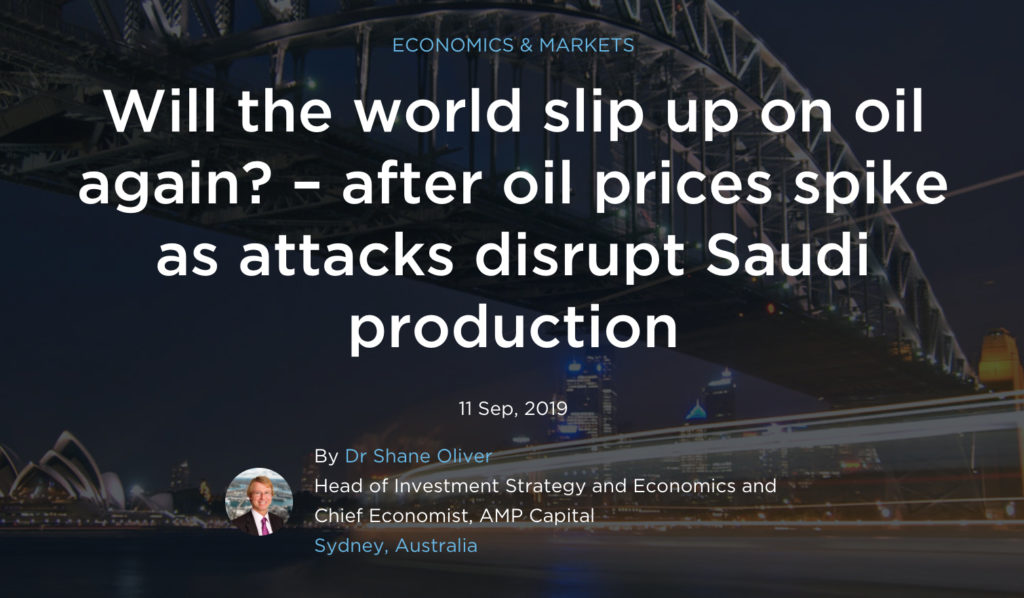 World oil prices have spiked since last week following weekend drone attacks on oil production in Saudi Arabia. This has naturally raised questions about the threat to economic growth, particularly if oil prices spike further, flowing on to petrol prices.

Since last Friday world oil prices are up by around 13%. Tensions have been escalating in the Middle East for a while now following President Trump’s decision to re-impose sanctions on Iran after the US withdrew from the nuclear deal with Iran. This has shown up in several attacks on oil shipments through the Strait of Hormuz, but the attack on Saudi oil production by drones takes it to a new level. Roughly 5.7 million barrels per day (mbd) of Saudi production is impacted and this is around 6% of global oil production. It also comes at a time when OPEC’s spare capacity of around 4mbd is reasonable but less than the outage from Saudi Arabia and there are ongoing issues in terms of supply from Venezuela and Libya.

Of course, the 13% spike in the last few days needs to be seen in context and so far it’s a bit of a non-event with prices still below levels seen in April and a year ago.

However, the concern is that oil prices could go higher and listed here are the key uncertainties involving:

The 5.7mbd disruption makes it the worst in history – worse than the Iranian revolution (5.6mbd) that saw a roughly three-fold increase in oil prices and the Iraqi invasion of Kuwait (4.3mbd) that saw oil prices briefly double. So, a further spike in prices is likely if the threat continues to escalate.

Working against this though: some of the disruption may be brief; OPEC’s share of world oil production has fallen from around 50% in the 1970s to below 40%; President Trump was elected after campaigning against never-ending wars in the Middle East and he may not want to risk further pushing up oil prices just over a year out from next year’s Presidential election so the US response may be limited to say taking out the drone bases where the attacks came from, albeit the risk of wider conflict has increased, and the US today is less reliant on global oil imports given a sharp spike in shale oil production. See the next chart.

What happens if tensions in the Middle East between Iran & its proxies and Saudi Arabia & the US continue to escalate resulting in a further threat to supply and a further spike in oil prices? Past oil price surges have clearly played a role in US & global downturns – in the mid 1970s, the early 1980s, the early 1990s, early 2000s and even prior to the GFC. See the next chart. They weren’t necessarily the driver of these recessions as other factors (like interest rate hikes and the housing downturn prior to the GFC) often played a much bigger role. But they made things worse because a rise in oil and hence broader energy prices is effectively a tax on consumer spending which leads to lower growth in retail sales, car sales, etc.

It’s not so much the oil price level that counts as its rate of change, as businesses and consumers get used to higher prices over time. Trouble normally ensues if the oil price doubles over 12 months. From where we were last week at around $US55 for West Texas Intermediate this would imply a rise to around $US110 a barrel (more for Brent and Tapis) and right now at around $US62 a barrel we are nowhere near that.

The situation in the US is also complicated because the surge in US oil production means that there is a huge boost to energy producers from higher prices providing some offset to the drag on consumers and businesses that use energy. Ultimately the negative impact on US consumers from rising oil prices would still dominate the positive impact on US energy producers so net its probably still a negative for US growth but just less so than in the past.

So, a further spike in oil prices that ultimately saw them double last week’s levels would be a significant threat to global growth. Particularly at a time when global growth has slowed, and trade wars pose an ongoing threat.

While higher oil prices boost inflation, central banks will ultimately look through this as it’s seen as a one off and ultimately less consumer spending power weighs on underlying or core (ie ex energy and food prices) inflation. So, a spike in oil prices is unlikely to stop further central bank easing as we saw in the early 1990s, early 2000s and through the GFC.

As can be seen in the next chart, Australian petrol prices track the Asian Tapis oil price in Australian dollars pretty closely because our prices are largely set globally (absent the GST, fuel excise, distribution costs and retailer margins). So spiking world oil prices will flow though to Australian motorists. Prior to the attacks in Saudi Arabia, Australian capital city petrol prices were around $1.40 a litre. The rise in oil prices since then implies a rise to around $1.46 a litre. This is not great for those of us who have cars, but would still see average petrol prices below the levels seen last October.

This extra $19 a week impost would act as a significant tax on consumer spending and almost offset the recent tax refunds for low and middle income households. This in turn would act as an additional drag on consumer spending. Again, while higher energy prices would temporarily add to inflation the RBA with its focus on underlying inflation would look through this, particularly given the reduction in spending power – and hence underlying inflation pressures – that sharply higher petrol prices would result in. So, it would be another reason to expect further monetary easing from the RBA.

The surge in oil prices is great for energy shares, but not good for the rest of the market given the impact on profit margins and consumer demand. It has also come at a time when global economic growth is fragile. Our base case is that tensions around Iran will be contained and the oil price won’t rise too far from here so it will be broadly neutral for global and Australian growth. But the risks have clearly increased and the situation regarding the Middle East and oil prices could trigger more volatility in the next month or so.